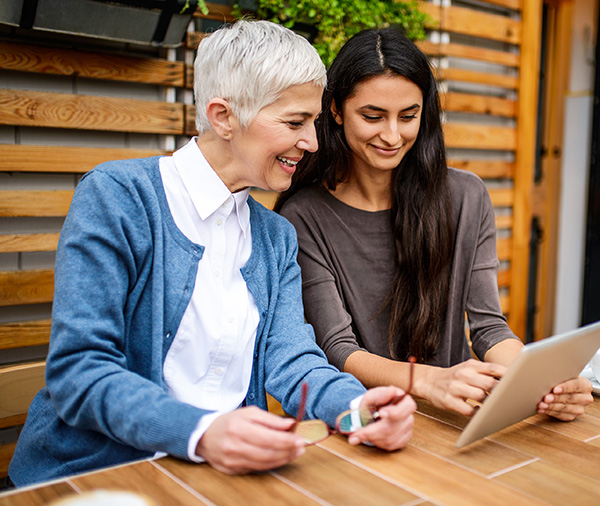 BONDS THAT BEND BUT DON'T BREAK

There’s a distinctive bond between children and their grandparents, who shower them with love and playtime and favourite goodies. But it is a bond that grandparents sometimes feel is broken in the transition from childhood to adolescence. However, experts in the intergenerational field maintain those bonds are not broken, merely different.

“Relationships change post-puberty because children’s priorities start to focus more outside the family. But grandparents are still important to grandchildren,” says Dr. Esme Fuller-Thomson, professor in social work at the University of Toronto and director of the Institute for Life Course and Aging, a centre for research into the processes and consequences of change over a lifetime.

“If they’re choosing between going out with friends or baking with grandmom, the competition gets a little steep.

Research shows that even at university age and beyond, grandparents are still important people in their grandchildren’s lives.” - Dr. Esme Fuller-Thompson

It’s just that their centre of gravity is growing more towards their peers. But, research shows that even at university age and beyond, grandparents are still important people in their grandchildren’s lives,” Fuller-Thomson maintains.

St. Thomas grandparents, Lisa and Glenn Heard, epitomize this view. They have maintained a close relationship with their four granddaughters, ranging in age from 11 to 21, the oldest now in university. But, says Lisa, it doesn’t happen automatically.

It requires effort and commitment. Keeping lines of communication open is key to maintaining the bond, Fuller-Thomson says. “Sharing their interests, even if it means hearing a little bit more about video games than they might want, gives kids that sense of unconditional interest and love from their grandparents that can keep the bonds together.”

The Heards have done that throughout their granddaughters’ lives. Two have equine interests and three are musical. Says Lisa: “We have gone to many, many horse shows and concerts, as well as school events and performances.

“Be involved as much as they will let you,” she advises, adding a codicil. “It has to be what they want. There is no point in asking a 15-year-old to do something he or she doesn’t want to do.”

Family traditions are another important factor. Activities that have created a bond throughout their lives – be it apple or pumpkin picking in the fall or seeing The Nutcracker at Christmastime – will continue to be important through teenage years and beyond, Fuller-Thomson says, calling it the “pay-ahead plan.”

Lisa and Glenn hit pay dirt here with Friday-night suppers, initiated 15 years ago and still continuing. Started as a way to help two working moms at the week’s end, they became an important time for family bonding.

“In many ways, they became a support network, a place to get help with school assignments or hash out problems,” Lisa says. “The kids don’t always come now but they come more often than not.”

Then there was the family cottage in northern Ontario that the Heards maintained for more than two decades until they had to give it up a few years ago. “It was set up for the kids, like a resort, and they came every summer,” Lisa says.

Fuller-Thomson enthusiastically agrees “the luckiest are those with a family cottage, grandmom and granddad and the cottage magic! It’s a touchstone for the whole family.” But any travel, from camping to intergenerational cruises, can cement those bonds, she says, recalling personal trips with her grandmother in her teens.

Lisa, who has always lived in the same city as her grandchildren, believes geographical proximity does help. However, Fuller-Thomson says today’s technology – the Internet, Skype, Facebook – are affording grandparents at a distance much greater opportunity to stay involved in their grandchildren’s lives than ever in the past.