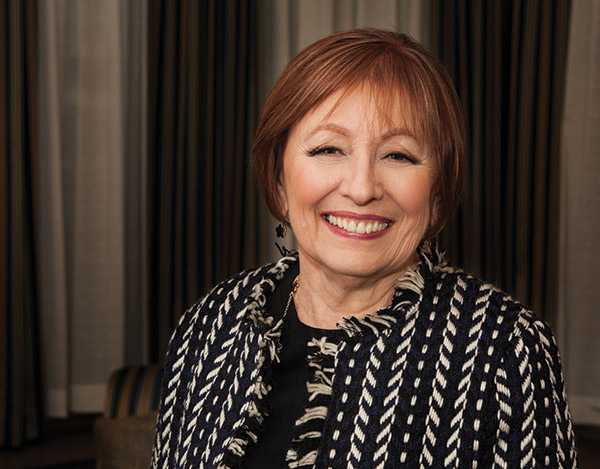 Stylist Susie Dalgleish wanted to “soften Christine’s face shape with bangs – a wispy fringe – and colour that would warm up her skin tone and make her eyes pop. A warmer base with highlights around the face adds brightness.”

What goes around, comes around. You get as good as you give. Karma will bite you or reward you. All of these sayings often prove true – just ask Christine Waincott.

This 74-year-old London woman was “thrilled and surprised” when she won a makeover sponsored by Salon Entrenous, Magari Fashions and Lifestyle Magazine in January.

During one of their weekly dinners, granddaughters Lauren Avery, Alayna Avery and Rachel Cole announced that Waincott had won the contest in which they had secretly entered her.

“She just teared up,” explains Lauren, who saw Salon Entrenous’ post on Instagram offering the makeover and got the ball rolling.

“She’s a spectacular woman who does everything for the people in our family," Lauren says. "She helps elderly women she knows who live alone to get to their appointments. She volunteers at church. She rescues dogs. She does special things for others but nothing too special happens to her.”

“We want to give people fresh ideas about fashion,” explains Mary.

Staffers helped Waincott choose a black and tan patterned jacket by Cupcakes and Cashmere that Mary describes as “very versatile,” explaining that it can be worn inside during the coldest months or outdoors in spring and fall, while being paired with slacks, jeans or skirts.

It was paired with an Uchuu sweater in black, with sleeve detailing to give it an individual look. The pants are leggings from Robert Kitchen. Suede boots from Dolce Vita with side zippers complete the look.

Next was a stop at Salon Entrenous for a new hairstyle and makeup.

Stylist Susie Dalgleish wanted to “soften Christine’s face shape with bangs – a wispy fringe – and colour that would warm up her skin tone and make her eyes pop. A warmer base with highlights around the face adds brightness.”

She cut her hair in an asymmetrical bob that offers ease of maintenance while looking chic and contemporary. Makeup artist Stephanie Dritsoulas wanted to accentuate Waincott’s “good skin and make it look soft and dewy” while enhancing her features.

To play up her eyes, false eyelashes were applied and Waincott’s eyebrows were tinted to darken them.

“As we age, we can lose pigmentation in the eyebrows and this gives a real lift to the face that can take years off,” explains Dalgleish.

Jim and Christine Waincott have been married for 35 years, and he (and the granddaughters) joined the final photo shoot at The London Club. He was admiring of his wife’s new look, saying “she looks beautiful but she always looks beautiful to me.”