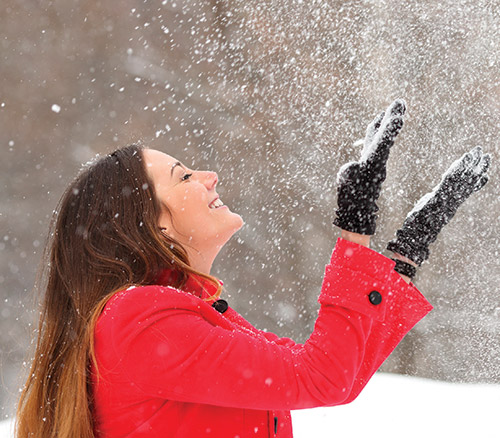 Truth in advertising can be as amusing as it is telling. A few years ago, a television commercial featured a woman in a room with an exquisite looking Christmas tree surrounded by perfect packages; there was a sumptuous meal on a table sporting lovely place settings. She was coiffed, made up and dressed to the nines . . . except when her back turned to the camera, viewers could see that she had forgotten to put on pants or a skirt under her festive apron.

Women have to give themselves permission to practice self-care, which can be especially difficult at this busier-than-ever time of the year.

That sums up what many of us experience during November and December’s weeks leading up to the festive season. Frazzled activity in an effort to present the perfect picture to our families, friends, business associates and the world.

But in all this frenetic activity, we may be losing some of the joy of the season. We may even be endangering our health.

To reverse this, according to Tasha Hughes - who has worked in the health industry for 25 years as a yoga instructor, registered massage therapist, personal trainer and who holds a black belt in karate – women have to give themselves permission to practice self-care, which can be especially difficult at this busier-than-ever time of the year.

Working with women in her Diva Defense program, she encourages them to say, “I’m on the priority list here, and I can’t be my best for others if I don’t make myself a priority alongside everybody else.”

As partners, mothers and co-workers we tend to say yes a lot, she adds. “Saying yes to yourself needs be be a priority.”

Saying yes is also something that Tara Green, of Green T Wellness, also advises. “Some people tend to isolate themselves at times of stress, but saying yes to an invitation to be with others is a good thing during the holiday season,” she says. She reasons that since isolation is a form of punishment – for instance giving children a time out – being with supportive, like-minded people is a reward for someone who is stressed.

Sticking to your fitness routine is difficult during the weeks leading up to the holidays, and rewarding yourself with the company of others while working out is the perfect answer to both issues. Hughes recommends getting a few friends together and working out together to defeat isolation and stay on your fitness track at the same time.

The holidays also have many obligations that can be turned around to help keep you on track. Wondering what to get folks on your list? Window shopping while mall walking gets your workout done while getting ideas for gifts. Park far from the mall when shopping (like you have a choice) or dance the night away at the company holiday party. Thinking of these as your daily workout will also give you the mental break you need from the guilt of eating too many cookies.

Meditation can help with stress during the holiday season but having a window of time to practice it can be problematic. Both Hughes and Green recommend taking brief breathing breaks, during which you concentrate on your breath as a way to focus thoughts and energy on relaxation and positive feelings.

“Breathe in for a count of four; hold for four; breath out for four,” says Hughes, in describing the process.

Green adds, “Giving yourself permission to take a two to four minute break between clients or tasks while sitting at your desk will have a positive cumulative effect.”