“Gomer and I have an environmental passion and don’t own a car,” says Kelly. “We like that it’s a sustainable, green environment,” adds Robinson.

Robinson works as a property maintenance technician with Sifton Properties Limited, and Kelly is a self-employed artist who works from home. The duo was living at Sifton’s Berkshire Village property when they learned of the impending green project and immediately felt it was for them.

Canada’s first net zero community of its size, West 5 features leading edge technologies – such as green roofs, dynamic glass windows, permeable concrete on some parking lots and Energy Star appliances. Solar panels on highrises and commercial buildings will help power the townhomes’ and apartments’ needs, resulting in a net zero energy use. Using recycled and recyclable materials for construction is also part of the sustainability model.

Sifton takes its green mandate seriously, with its own office using gathered rainwater to flush toilets, dynamic glass in windows to compensate for the sun’s movement throughout the day and an eco-copier that uses erasable ink and allows paper to be reused six times before being recycled, as a few examples.

Being environmentally conscious isn’t new for Sifton Properties Limited, which built London’s first solar home in 1978 and the city’s first net zero home in 2015. Commercial spaces haven’t been left off the green list, with the city’s tallest and most energy efficient building, One London Place. Built in 1992, cutting-edge technologies at the time included employing thermal ice technology.

Using the 46 roof-mounted tanks of the thermal storage system, “we make ice at night when the temperatures are cooler and there is less demand for energy and use the ice during the day for cooling the building in the HVAC system,” says Domenic Ripepi, operations manager.

To share the passion for emerging technologies which promote sustainability, they have built and staffed the Discovery Centre, on the first floor of the Sifton Centre, featuring a full-scale, three-dimensional model of how West 5 will look at build-out. It also features technologies that will be incorporated into the development and some proposals that are exciting possibilities for use in sustainable living scenarios.

Tyler Young, community connection coordinator, says the Discovery Centre is open on Fridays from 3 to 7 p.m. and on Saturdays from 8 a.m. and 4 p.m. School and community groups, as well as families and individuals, are excited to see what’s possible in green living, as Young reports that there have been 1,200 visitors to the centre since it opened in August last year.

One of the most popular exhibits is the virtual reality area, where visitors don goggles to take a virtual walk through Kains Woods. 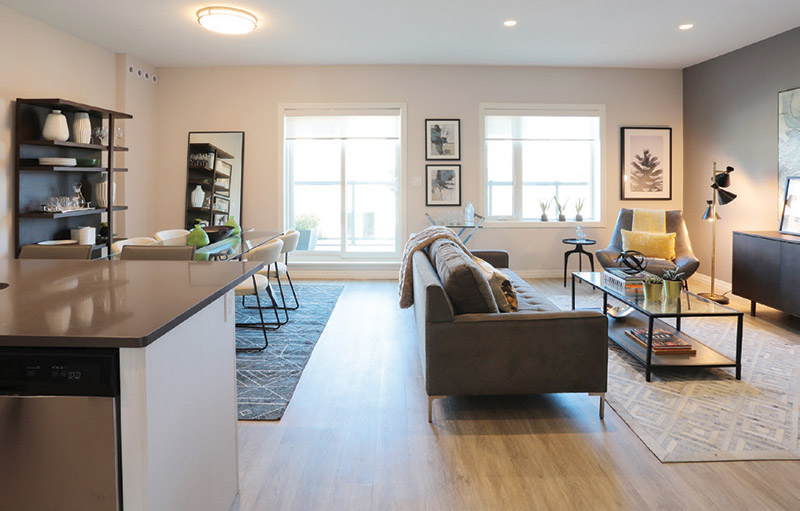 “It’s a completely immersive experience, and it’s cool to be part of that,” says Young.

It’s easy being green at West 5, so Kelly and Robinson were lucky to land a rental in one of 47 units that were built as the first part of phase one, which are nearly fully occupied. The second part of phase one, 40 units, will be completed this summer, according to Neil Carter, director of commercial and retail construction. Phase two will be comprised of 75 to 80 rentals and is in the preliminary planning stages.

Living in a two-bedroom, one bath unit called The Urban, Kelly and Robinson appreciate that they are experiencing a brand new living space, that reflects their sustainable mindset as it's equipped with energy efficient appliances, but also has high-end finishes for a price comparable to other suburban rental rates.

“The rent is at market value but we are saving 40 per cent on our utility bills,” says Robinson.

There are seven styles of suites available for rent, ranging from two bedrooms to three bedrooms plus den. Some units have garages and terraces, as well.

High-rise buildings will have office and retail space on the first two floors and rental apartments on the higher floors, according to Brandi McIlvenny, director of residential rentals.

Covering 70 acres, West 5 is a mixeduse development, with half devoted to residential rentals. Carter says there will be 250 to 300 townhouse units and 1,700 apartments at build-out, expected to be in 10 to 15 years. All of the units are intended to be rentals, but some may be converted to condos, he adds, depending on market demand.

West 5 is located just west of the convergence of Oxford Street and Commissioners Road. It is complemented by two additional developments, The Avenue and Warbler Woods, both of which are made up of single family homes across the road.

Because 50 per cent of West 5 will be made up of service-based businesses, restaurants and retailers, both West 5 residents and residents of the two single-family-home developments will be able to access all goods and services they’ll need in this walkable community.

According to Elizabeth Johnson, commercial space leasing manager, several spaces are already rented of the 400,000 square feet of mixed office and retail space.

“We will have all the amenities that someone will need,” she explains, with the goal to make it a destination for shopping and entertainment. “We’ll be a one-stop shop.” The emphasis will be on attracting new, unique and non-franchise commercial renters.

“Keeping it unique will help drive traffic to our space,” adds Johnson.

The latter is already getting uptake with Medpoint Executive Health moving offices from Byron to West 5, as well West 5 Family Dentistry opening in January.

Paige McCann, regional manager for Amity Dental Management, says, “We love being part of something that’s eco-friendly and so up and coming.”

She adds that these dental offices will be using new equipment that is “eco-friendly, like our digital x-rays.” McCann explains that they expose pateints to less radiation and save resources because they don’t need to be printed.

As part of the the development’s goal of being a self-contained environment, West 5 Family Dentistry is onboard. “We have highly trained professionals, so we don’t have to refer out to specialists very often.”

Healthy lifestyle and physical fitness are part of the sustainable mindset at West 5. To that end a new business has found a home in this innovative environment – Backroads Brews and Shoes.

She and husband Aaron Hendrikx opened the business in December at West 5. The newlyweds decided to launch their new concept there because of its commitment to sustainability and healthy lifestyle, as well as it being a prime location for their target demographic.

“The whole development is going to be a shopping destination five years from now,” says Emily.

Backroads Brews and Shoes will organize running groups that will make use of the trails that surround the development, and, she adds that since running is a social sport they like to enjoy a drink after running. But stopping into the tap room doesn’t have to include a run, as it is open to anyone who is thirsty for local libations.

Robinson and Kelly also enjoy that this west end development is surrounded by trails.

“There are two forest trails just five minutes from us,” says Kelly who enjoys living in a more natural environment. “It’s just quiet and clean.”

The green spaces planned inside the community will be a key part of its lifestyle equation, with an entertainment area, Legacy Square, in Central Park. Summer concerts, food festivals, farmers’ markets and outdoors games are all planned activities for the green space.

“We’re reshaping this part of London, with entertainment and shopping opportunities,” says McIlvenney “It has a vibrant, social and interactive feel.”