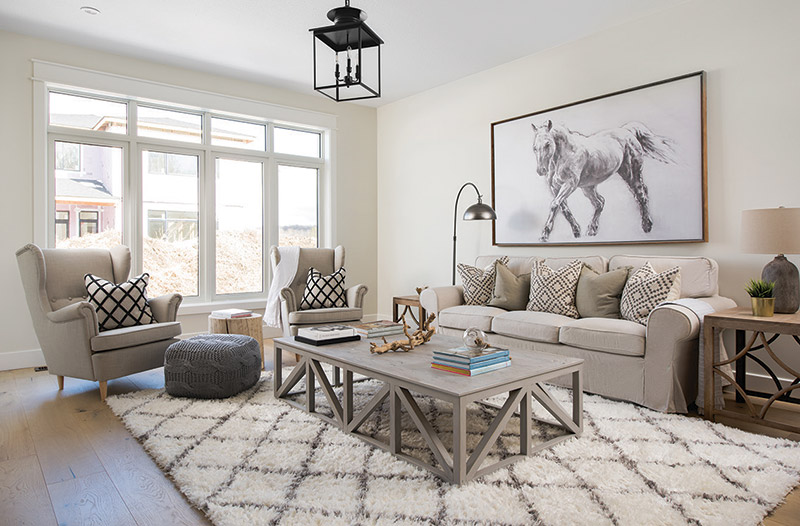 Noted London home stager Jillian Summers had two words in mind as she started planning the model home interior for the new Wickerson Hills development in west London’s family-friendly Byron neighbourhood. “Cozy and inviting,” Summers said, “as opposed to being a home where you are afraid to touch anything.”

The four-bedroom Providence model by Jefferson Homes, with both staging and interior design done by Summers’ company Upstaging Limited, features a modern-looking exterior with a farmhouse chic interior. It boasts wide-plank engineered flooring, an exposed pine beam, and both vertical and horizontal ship lap. “It immediately creates an emotional connection,” Summers said of her design and staging choices.

The artwork and furniture – which can be purchased by the model home’s eventual buyers – for the staging includes a custom-made, oversized coffee table in the great room and a billiard table in the family room.

Creating a modern farmhouse design means using comfortable furniture mixed with salvaged materials. Nowhere is the latter more prominent than in a clearstained pine barn beam, which runs along the ceiling. It provides a visual dividing line between the open concept kitchen, great room, and dining room. The beam is the model’s most distinctive feature, and Summers hopes future owners won’t change it with paint or a row of artwork.

The kitchen’s cabinets show Summers’ whimsical side with chicken wire replacing the expected glass or wood on cabinet doors – a clever nod to the farmhouse theme.

The dining and great rooms are divided by a two-sided gas fireplace. The tile design used for the fireplace is spotted elsewhere in the home, including an upstairs shower enclosure and in the main floor laundry room. She chose wideplank, light-coloured engineered flooring.

Interior doors are painted in dark colours against soft white walls. Transom windows are used above the doors to create an elongated look.

Summers let loose with her choices of light fixtures, the most eye-catching of which is in the bathroom for a secondary bedroom. The fixture design echoes industrial water faucets. The master bedroom ensuite features sliding barn-style doors.

The model home – which will sell for approximately $750,000 – can be replicated on other lots within Wickerson Hills, which is being developed by York Developments.

Summers and Jefferson Homes have previously worked together at Foxwood Meadow in northwest London.