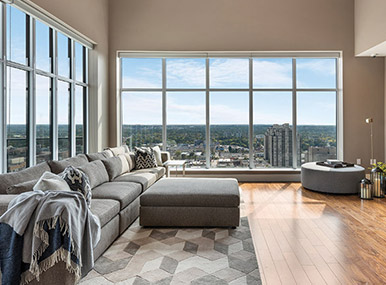 The library is one of the luxuriously appointed common rooms on Azure’s 29th floor, where homeowners can relax and have quiet time high above the busy city. The fitness room is also located on this floor and affords panoramic views while working out. 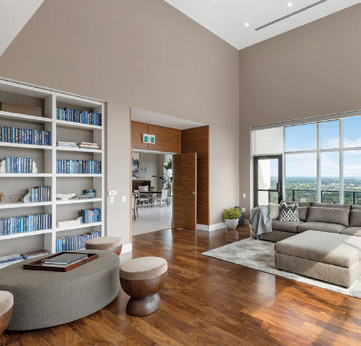 The kids are grown and are embarking on adult life, so the house is big and the yard can be a lot to maintain when you want to be on the golf course or an airplane. As cliché as this sounds it’s a situation record numbers of boomers are in. A survey of 1,000 Ontarians last summer revealed half are considering downsizing.

Dave Staines, 55, and Rebecca Herrington, 60, decided to move from their family home in Dorchester to the RiverBend Golf Community 18 months ago. With their sons in university and wanting a home that readily adapts to their active lifestyle, the couple decided that purchasing a condo in this golf community was the perfect choice.

“We are very active,” explains Staines, “and use the indoor gym and indoor swimming pool year round. We like the fitness classes and walking on the Kains Woods Trail that is accessible from RiverBend.” The duo spends a couple of months each winter in Florida, so the low maintenance, turnkey character of a 50-plus community appealed.

Sharon Riopelle, sales consultant for Sifton Properties at RiverBend, confirms that this is the demographic and lifestyle for most of its residents. “Some of our buyers are working couples, others are early retirees. Some are doing a downsize and looking for a certain type of lifestyle,” she says of the homeowners living in this 400-acre gated community that is adjacent to an 18-hole golf course.

There will be 450 homes, 390 of which are already sold, constructed by the time RiverBend is completed in the next few years. There are 10 different floor plans for the detached one-floor condominiums, ranging from 1,800 square feet to 2,500 square feet. Villas are clusters of attached homes.

One aspect that Staines and Herrington enjoy is the social interaction of RiverBend. “Neighbours will email and say they are going to the clubhouse for dinner and there was Christmas caroling along the streets during the holidays. You’ll see clusters of people chatting by the mailboxes. It’s much more social than the suburban type of neighborhood we lived in before,” he illustrates.

He also appreciates that neighbours are allowed to make changes to their yards unlike most condo situations. “They allow you to expand your exterior space, as long as its friendly to the deer and the plants are noninvasive,” explains Staines.

When Robert Gwaichmai and Susan Prince (both in their 60s) decided to sell their rural property outside of Toronto and move to London, they were seeking a more urban setting and wanted to live downtown. They moved into Tricar’s Azure in November of 2018 and love that they are able to walk everywhere.

“There’s a variety of cultural things to attend and lots of restaurants because we’re a block away from Richmond row. We’ve been to Budweiser Gardens for a concert, to the Grand Theatre and to the movies at Citi Plaza; we walk to the (Covent Garden) Market for a coffee and to buy groceries on the weekends.”

The couple chose London because Gwaichmai grew up here and still has family here. Seeking the urban vibe, they also considered Toronto, London (England) and New York City. “We knew we’d be right downtown because we want to enjoy culture without having to drive an hour and without paying to park our vehicle,” he says.

Purchasing a condominium in the Azure building fit the bill with its location and amenities. They both use the gym several times each week and are planning to use the golf simulator – both features of the 29th floor’s public space.

Frank Clarke, of Oliver and Associ-ates Real Estate, who, with Kim Toonk of Oliver and Associates Cornerstone Real Estate, is the sales representative for Azure, says that the amenities on the 29th floor, along with its views, are one of the biggest appeals to boomers who are craving a downsized upscale lifestyle. Of the 198 units in the build-ing only five are still on the market. They range in price from $446,000 to $899,900, the latter representing the price for a penthouse on the 28th floor.

“The 29th floor has the gym and golf simulator for indoor exercise but also a lounge with a television. I’ve seen five gentlemen who don’t know each other in there watching a hockey game,” he says of the social aspect. In the summer months, a large terrace area on this floor gives residents some of the best views in the city. “Outside there’s lots of seating, trees, barbecues and a fire pit,” says Clarke.

Whether your next chapter lifestyle dictates life on the edge of the city or an urban setting, downsizing could be the answer to starting to live your best life. 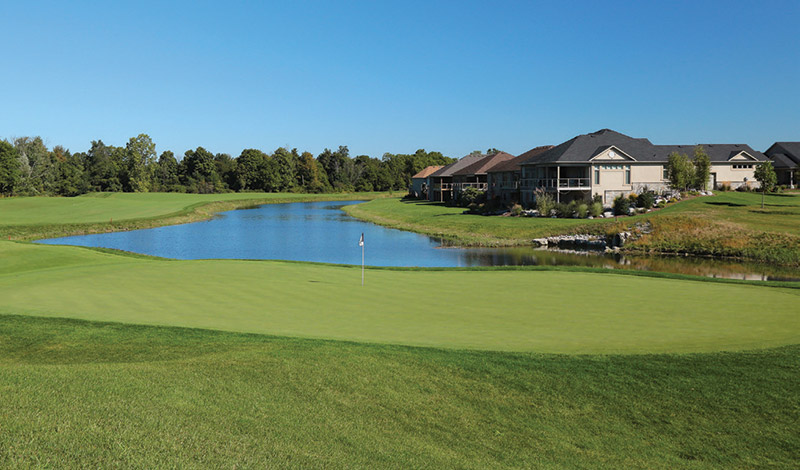 A lush setting on the city’s edge, RiverBend is a vacant-land condominium development that features an 18-hole golf course as one of its amenities. This meshes with the active life sought by many of its residents, who want a low-maintenance, turnkey home. 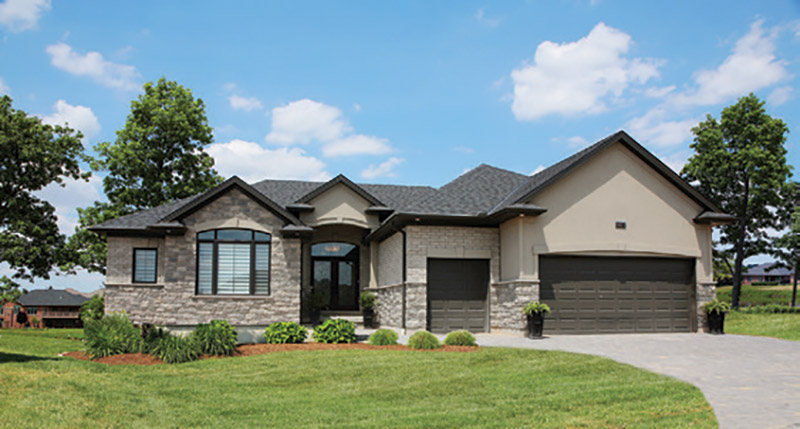 A popular feature for many homeowners at RiverBend is the special golf cart port built into the two-car garages of the homes. Those who don’t golf often use it as a workshop space or extra storage, according to Sharon Riopelle.

This Sawdust model home has been personalized to the tastes of its owners. It’s a twoplus den with 2,541 square feet of living space. 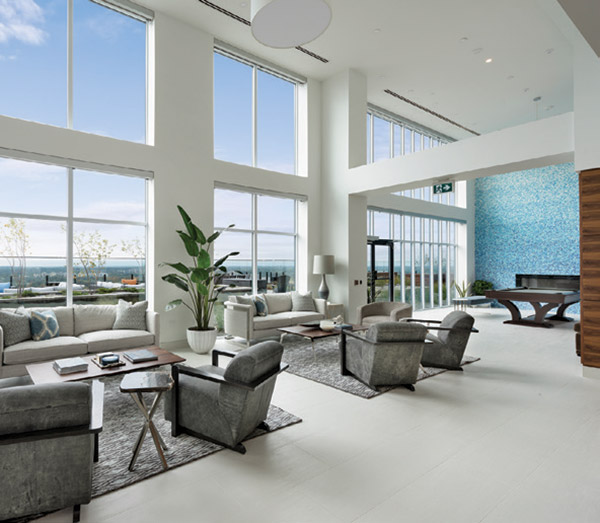 The Azure building’s 29th floor is amenity space overlooking the city, with oversized windows to maximize the sweeping views that can be enjoyed while chatting or playing billiards with friends and neighbours. 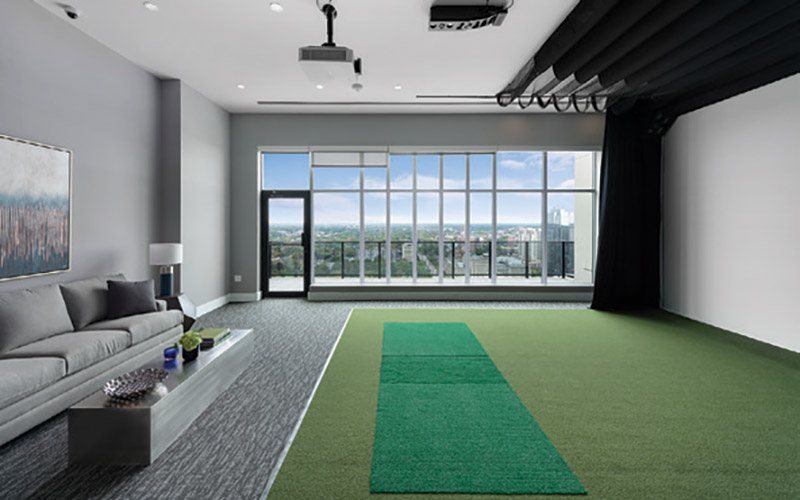 One popular feature on the 29th floor is the golf simulator that allows homeowners to exercise and work on their swing year round when inclement weather prevents them from getting out on the course. 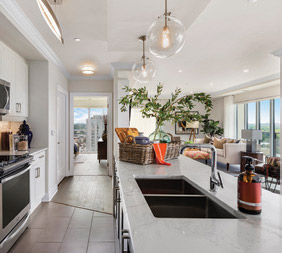 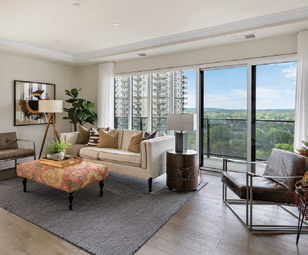 The Madison model is a two-plus den unit with 1,615 square feet of living space. This one is located on the 12th floor of Azure. With open concept living, homeowners can cook and enjoy the view at the same time.