A mirror to the future 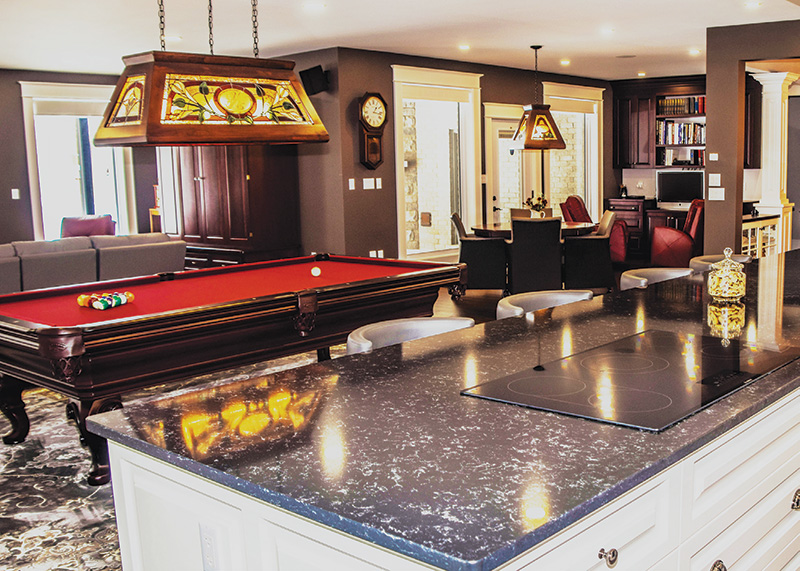 When Aylmer contractor Keith Hunt was asked to build a home for a couple he’d known since high school, he knew it would be a spectacular project. For all involved though, it turned out even better than imagined.

“It’s one of those projects that comes once in a lifetime,” Hunt says about the custom-built home for Wayne and Wendy Hiepleh at 158 Caverly Road in Aylmer.

From the octagonal room with a vaulted ceiling to the 15-foot island in the kitchen, each feature of the residence is tailored to the couple, married almost 40 years.

“It’s not designed with anyone else in mind, other than Wayne and Wendy,” Hunt says.

Like the connection of the cabinetry from the kitchen to the dining room that ensures a graceful transition between rooms, the move for the couple from farm to town was made smoother by the thoughtful use of transition pieces. For example, the gas fireplace mantel in the octagonal room is the exact same design as the one in their farmhouse, as is the gothic window that greets visitors from above in the front of the home.

Antiques and heirlooms such as books that belonged to Wayne’s great grandparents, dating from the 1800s, add distinction to the residence.

The octagonal room is an unforgettable eight-sided space. It is a scaled-down version of a room that the couple enjoyed in their farmhouse.

“We wanted to downsize but we still had things we weren’t willing to give up yet,” Wendy says.

These pieces bring with them memories, stitching together the life they shared in the century-plus farmhouse for 38 years and the modern elegance they’ve planned on Caverly Road.

Barry Acheson was the architect of the 4,000-square foot home and worked with the specifications given to him by the Hieplehs.

“It was nice for us because Wayne and Wendy…knew exactly what they wanted, even before the job started,” says Hunt, who has owned his company – which specializes in construction cost consulting and project management – for more than 25 years. “Wendy even knew where she was going to place her furniture. That helped us with electrical and mechanical layout.”

The open concept kitchen, which includes a walk-in pantry with enough storage to please any bulk buyer, ensures the food preparer doesn’t miss any of the action in the dining room or at the pool table, which is the gateway to the great room.

“At 5 p.m., when we’re done doing whatever we’re doing, we usually have three games, maybe two if someone wins two in a row,” says Wendy. “It’s fun.”

The abundance of windows allows natural light. This, coupled with the clean lines, accentuate the rich colours of the walls, such as America’s Cup blue and Midnight Hour. The chosen hues also show off the lovely custom cabinetry in several rooms and the maple bookshelf, all built locally by Peter Wall.

The spacious garage provides a workshop area for Wayne or could hold up to four cars. A U-shaped driveway sets the house set back from the street and gives the property a sense of elegance.

The Hieplehs moved into the home last November, but most of the landscaping got underway with spring’s warmer weather. The work included putting in a patio with a pergola at the back of the house that sits on a 650-foot deep lot abutting a field. A gas fireplace on the back deck of the home provides a nice option to sit and enjoy the outdoors. There’s also a fire pit with a picnic table on a sandy area for after dark.

“They were busy their whole lives working on the farm. They’re just starting to enjoy their retirement,” Hunt says. And enjoying it in style.