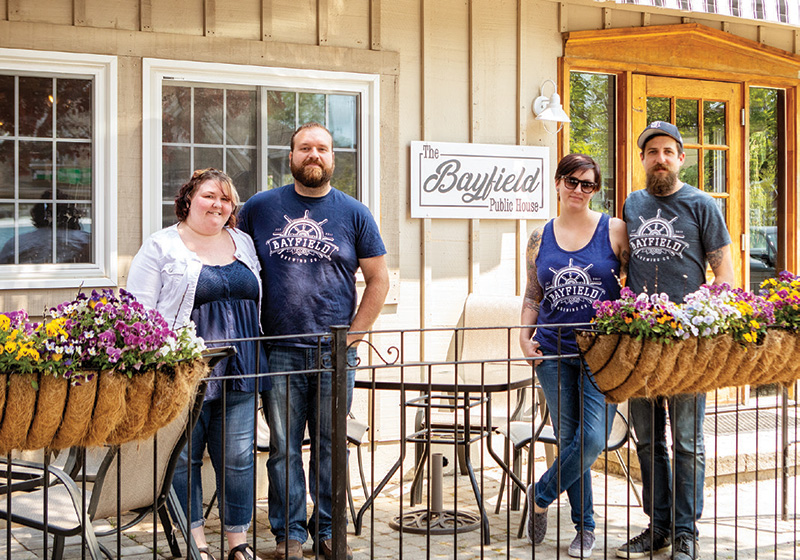 Staying and playing, wining and dining, shopping or pampering - whatever the reason for visiting Bayfield this summer, there are several new businesses in this Lake Huron village aspiring to make the trip memorable.

“It’s going to revitalize the downtown, breathe a whole new air of life into the community,” says Graham Wallace. He and partner Cody McWhirter have refurbished and reopened The Red Pump as The Lake House. They launched the reinvented seven-suite bed and breakfast and restaurant this spring.

Their initial focus has been on food. Three dining rooms were renovated, with the addition of a 17-foot bar fashioned from antique pieces that came with the building. The facility also has a conference room that can accommodate a variety of events, from concerts to wedding receptions.

Wallace describes their new menu as “casual dining,” including vegetarian and gluten-free offerings.

Bayfield Massage Therapy and Esthetics has opened as a separate new business sharing space with The Lake House. This enterprise brings together three local practitioners: registered massage therapist Karen Searle and estheticians Brooke Armstrong and Liz Allen. The three women were working independently in the village and decided to pool their resources in a single location.

“I’ve always worked on my own,” Searle says. “But I’ve known these women for quite a while and have the utmost respect for them. So this is an exciting new venture to be working in a shared space.”

Armstrong adds, “We were all looking to set up a business in Bayfield and Karen felt the three of us would work well together. We look forward to serving regular clients, as well as visitors. We hope this (business) will play a small part in adding to Bayfield’s economy and tourism.”

Allen agrees, “I love the atmosphere in Bayfield and am excited about opening our business here.”

In addition to hand, foot and skincare esthetic services, Armstrong is a certified eyelash technician and Allen is certified in eyebrow microblading, a semi-permanent tattooing technique. The latter also does hot stone massage, aromatherapy and head and scalp massage.

Another village landmark reopened this year with a new ambiance. The Albion Hotel, a Main Street feature since the mid-19th century, has been taken over by Jeff and Leigh Graham.

Jeff worked in the Albion’s kitchen as a teenager and honed his culinary skills there. The couple has remodeled the dining room and revamped the food and drink menus as well as the tap selection.

“It’s casual dining with a good pub feel to it,” Jeff says. “Our focal point is pub food. We’re getting into more barbecued and smoked meats, gourmet burgers and the biggest chicken wings around.” There are also a half dozen new craft beers on tap.

The hotel has four guest rooms with common patios at the front and rear of the building, where guests can enjoy drinks or a meal, while watching the Bayfield world go by.

Craft beers have come to Main Street. Bayfield Brewing Company is spearheaded by two couples: Ryan and Sarah Keys and Brian and Lyndsay Clarke. They’ve developed a specialty brew, The Canadian Pale Ale, and opened a brewpub in the former DaVinci Ristorante. As the brewery grows, they plan to do small batches of one-off brews, changing them up weekly, says Sarah Keys.

To complement those fine brews with good food, one of the co-owners Brian Clarke, has taken over as resident chef at the adjacent Public House. He likes to think outside the culinary box, Keys says. For instance, she cites his nachos that eschew the traditional ground beef and cheese in favour of avocado and tuna topped with mango salsa.

All breads and pastries are made onsite by an in-house pastry chef, and the cocktail menu includes such specialties as two-person punch bowls and smoked drinks that give a unique flavour to whiskeys and bourbons.

Another feature that customers are appreciating is the open kitchen behind the bar. Patrons seated there can watch Chef Brian work his meal magic.

Celebrating its first year in Bayfield this summer is Dublin Mercantile, a family-owned home décor store. It’s operated by Art and Cindy Larivee, who opened their first Mercantile in Dublin on Hwy 8 between Goderich and Stratford, 18 years ago.

While both stores carry their anchor items, the Bayfield location, with its Lake Huron shoreline, has more “beachy” items, Cindy says. “We specialize in seasonal décor.” Saying that, “At Christmas, the whole store is Christmas.” And, in Bayfield, “summers are amazing as it’s a real summer destination.”

The stores are open every day except Christmas, Good Friday and Easter Sunday. “It’s going to take time to build the off-season in Bayfield, but we’ve been very encouraged and it certainly has been a success,” Cindy says.