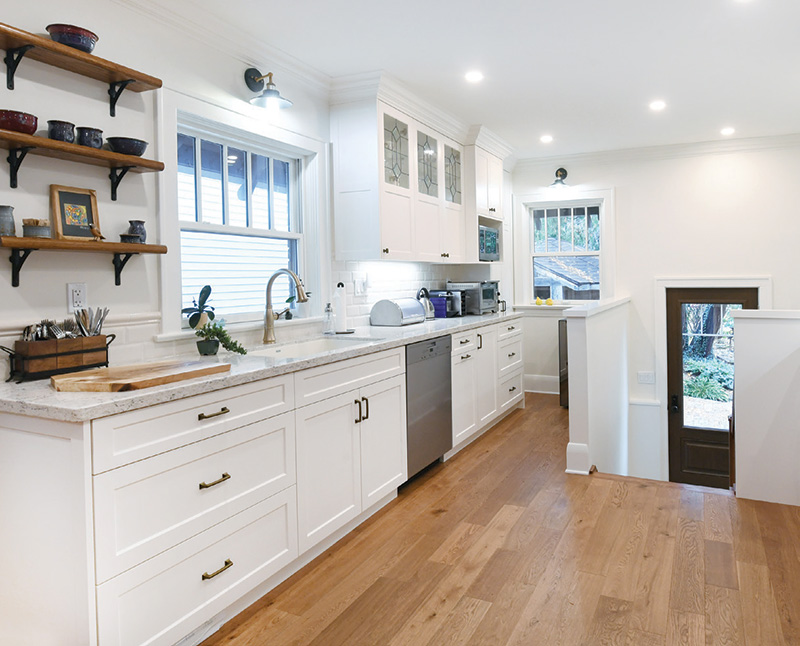 A bright, open space was created in Mary Carol Watters’ previously dark and divided kitchen/dining room (inset) by removing the peninsula and hanging cupboards that had been added in a previous renovation of the 1930s bungalow. 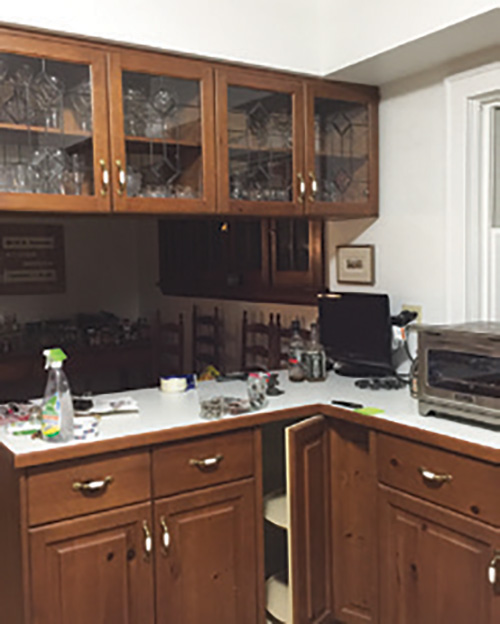 Many would shudder at the thought of the mental angst and physical inconveniences caused by overhauling a nearly-century-old home but doing it twice surely means one is a glutton for punishment. Not so for Mary Carol Watters.

Now retired from her position as Dean of Students at Kings College, Watters loves her Old North home – its character, location and yard - so much that she decided to forgo downsizing in favour of adapting the house she purchased in 1981 to be the right setting for her and her two dogs - Yawshu and Darcia – to age-in-place. The character of the one-floor bungalow, built in the 1930s, still charms her.

After seeking several quotes, Watters decided to work with Craig and Bonnie Hardy of Covenant Construction, with the whole process from start to finish taking three months. “We can make the process pretty straight forward,” explains Bonnie Hardy. 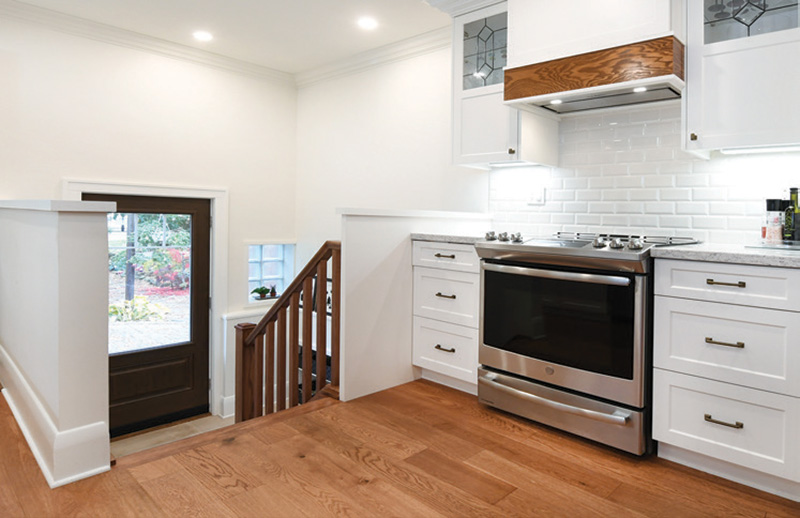 To pay homage to this room’s previous life, a wooden range hood detail and floating shelves were created from the door that divided the kitchen from the rest of the home. Reconfiguring the stairs leading to the basement opened up the landing and added square footage to the kitchen.

“Craig meets with the client and takes the measurements. He talks to them about the changes they want to make and their needs. He sees if there are any structural issues or infrastructure issues to deal with. We’ve been doing this for so long that he can bring those notes back and our designers can put together the drawings and elevations. Then I can cost it out in their budget range. A lot of the process is simplified.”

The kitchen area had been renovated in 1986 and Watters loved the hand-crafted glass panes used in the hanging cabinets that previously divided kitchen from dining area. Some have been repurposed and now face the new cupboards that line one entire wall of the kitchen and others are featured in a porch privacy divider.

Other repurposed items include the swinging, wooden kitchen door. It was used to construct floating shelves that add colour to the white walls and to add character to the range hood over the stove.

The kitchen/dining area is now open and bright with white cabinetry and flooring that Watters favours. Pot lights line the ceiling of the previous dark space and a transom light over the back door also adds openness.

To work together more easily making choices on finishes, colours and flooring, Hardy and Watters shared ideas on the website called Houzz. Hardy says this shortcuts the back and forth process. Other areas that were renovated to make it more user-friendly include the steps and landing to the basement, as well as a laundry room on the lower level. 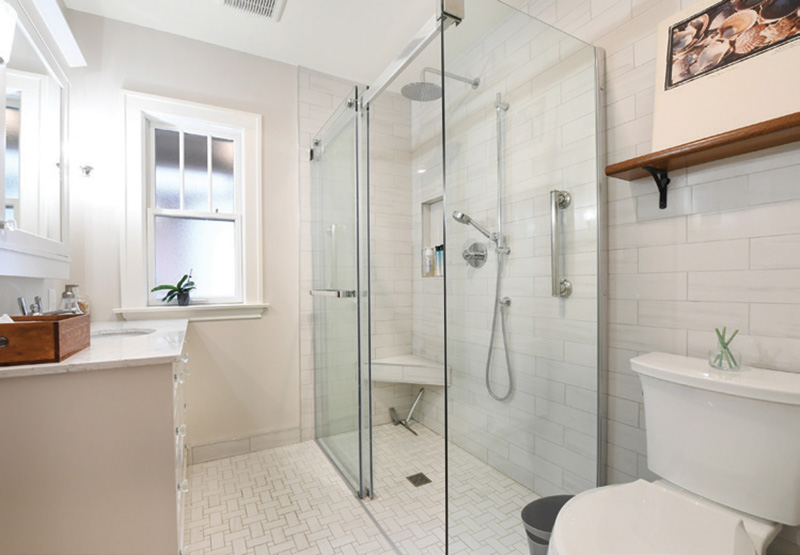 Since Watters wants to live in the home as she ages, the team added features to the bathroom that she doesn’t need now but could in the future – grab bars and a curbless, walkin shower. These also make the home “sale-ready in case anything happens to me,” explains Watters. Guests often appreciate the grab bar next to the toilet but making it fit in with the character was important to Watters. She didn’t want an institutional feel.

Hardy explains, “Moen and Delta have attractive options.“ Eliminating a small hallway linen closet allowed the cramped bathroom space to be reworked to include the large shower. Now a commodious vanity provides storage for towels, eliminating the need for the linen closet. It makes the space more appealing while maintaining a look that works with the age of the home.

A tiny bedroom closet was turned into two ample cupboard units tied together with a window seat in the master bedroom. Space was gained by reconfiguring the basement stairs.

Though the building’s footprint is the same, the home feels much larger and more open post-renovation and Watters is pleased that she’ll be able to enjoy it for years to come. “I get up every day and think just how much I enjoy the space,” says Watters. 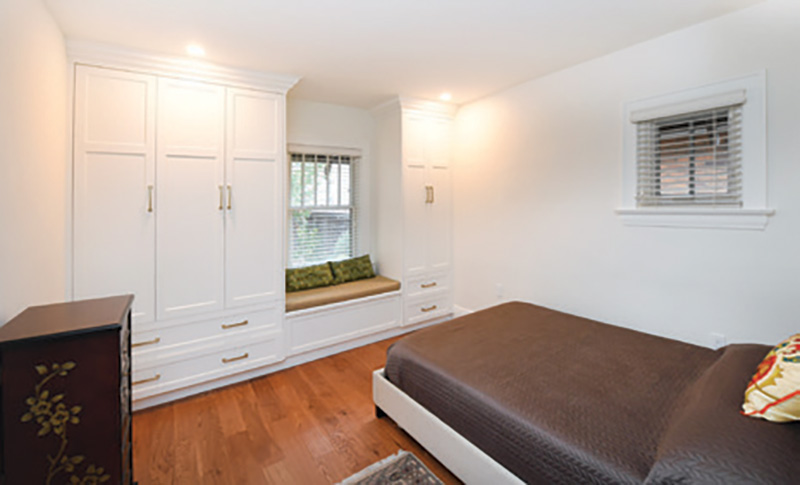 A cramped closet gave way to two large cupboards that provide space for clothes and shoes, as well as a cozy reading nook.