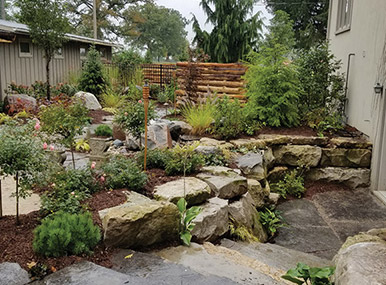 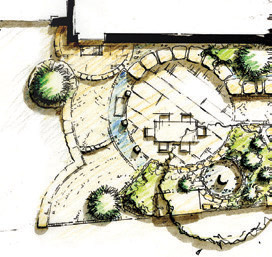 If you fail to plan, you plan to fail. This old adage is true of many aspects in life and none more so than undertaking a garden overhaul. However the planning process looks different depending on the landscaping professional and the size of the project.

When Bill Anderson and Purveen Skinner wanted to overhaul the yard of their Mount Brydges home last summer, they got quotes from four different companies and checked out their work. Looking for a “welcoming, natural, holistic feel” to the front and back yards and desiring a pool installation, they went with John C. Young Design to execute the big project. “We thought about it for two years and did a lot of homework,” says Anderson. “We talked to suppliers, went to home shows, did online investigations and were in and out of nurseries,” he adds explaining the process of getting ready to expend several months of time and energy, as well as a sizeable budget to get what they wanted.

Anderson and Skinner were attracted to Young’s style of implementing natural, graceful spaces but also were pleased that he could deliver the complete project, from planning to implementation, as well as the low-maintenance fibreglass pool they wanted.

“Earlier is always better,” says John Young, of the planning process. “People want to enjoy the short summers we have.” He says starting out with a personal vision of what you want and goals for the area are vital to a satisfactory outcome. 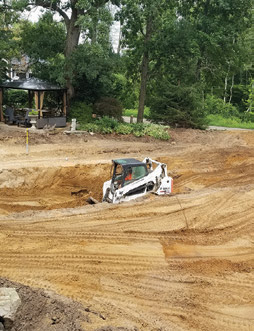 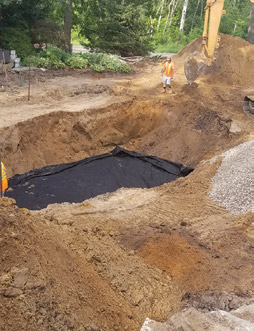 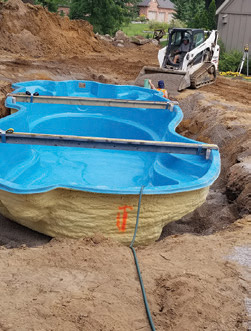 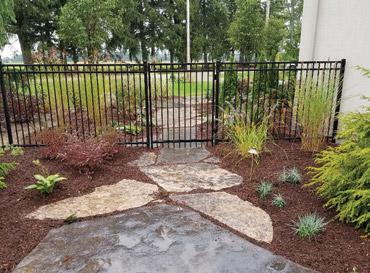 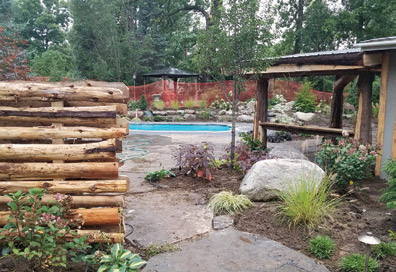 The homeowners, Bill Anderson and Purveen Skinner, wanted a unified look in the front, side and back yards, as well as an easy-care pool and are delighted by the finished effect that John Young was able to deliver.

After planning comes preparation. Vegetation was cleared and the hole for the pool was dug. Because ground water was discovered, a platform was built to hold the pool structure. The pool – measuring 32 feet by 18 feet – was inserted in the hole. The natural looking landscape was continued from the front and side yards, providing important visual privacy barriers for the yard. A fence and wooden timber privacy panels were added. An existing shed had a pergola added and was converted to become the pool house. 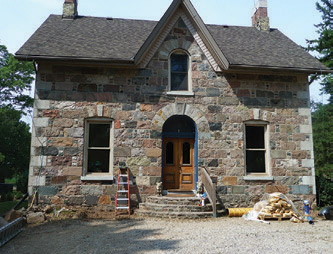 Edwards and Sons did a complete overhaul of the large acreage surrounding this 150-year old farm house for the Sworiks. They wanted an easy-to-care-for, natural- looking yard so some of the existing plantings were removed and large stones and boulders were moved to better locations to begin the process. 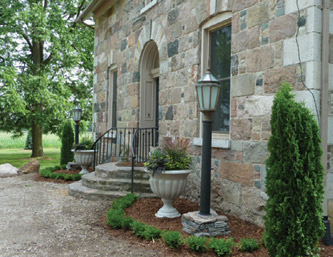 The Sworiks now enjoy the yard of their rural Thorndale-area home, including a bubbling rock feature that is easier to maintain than the pond at their previous house in the city’s Old North area. They appreciate that Edwards and Sons were able to take care of all aspects of the large, multi-year project.

"Get referrals, check them out with the Better Business Bureau and make sure they are reputable."

He also cautions that the size of your budget will determine the scope of the work. “Manage your expectations,” he says. “Many customers have elaborate ideas but the budget doesn’t match.” Doing the work in stages over a few years can mitigate strain on nerves and wallet.

Managing expectations extends to thinking realistically about the size and work involved in a project, especially for DIYers. Ripping out and disposing of sod and old plantings, installing wiring for new lighting, obtaining machinery to do the project can be daunting for weekend warriors who undertake large projects. Edwards’ clients Bruce and Karen Sworik were two homeowners who knew they needed help when rehabilitating the landscaping around the century-and-ahalf old farm house they purchased near Thorndale. Their previous Old North home had more sculptured gardens, so they wanted this large yard space and pool area to have a more natural look and be easier to maintain. “It gets very dry in the summer and we have a lot of wind out here,” explains Karen Sworik.

The former farm’s outbuildings were full of equipment and assorted agricultural implements, so clearing and sprucing them up with new gravel was the first step undertaken in the first year of work on the property. The rocks – some the size of boulders – were gathered and arranged around the driveway area, according to Karen.

The following summer, trees were planted along the property line, landscaping was established around the house and pool and a bubbling rock was installed. The latter is a favourite feature of the couple. “We didn’t want the upkeep of another pond so this was a nice way to have a water feature,” she says. The Sworiks felt comfortable with Edwards and Sons’ interactive and collaborative planning style. They had ideas that were discussed and elaborated on by the landscapers.

To ensure that his team and the homeowners are on track during a project, Chris Edwards suggests the following: “We get as much in writing up front as possible so that we make sure we’re on the same page. We touch base at the end of each day to make sure they are happy since many homeowners make changes to the plan after a day or two and seeing its development. Third, we often take the homeowner to the nursery so they can see the plants before putting them in the ground. Communication is the most important thing.”