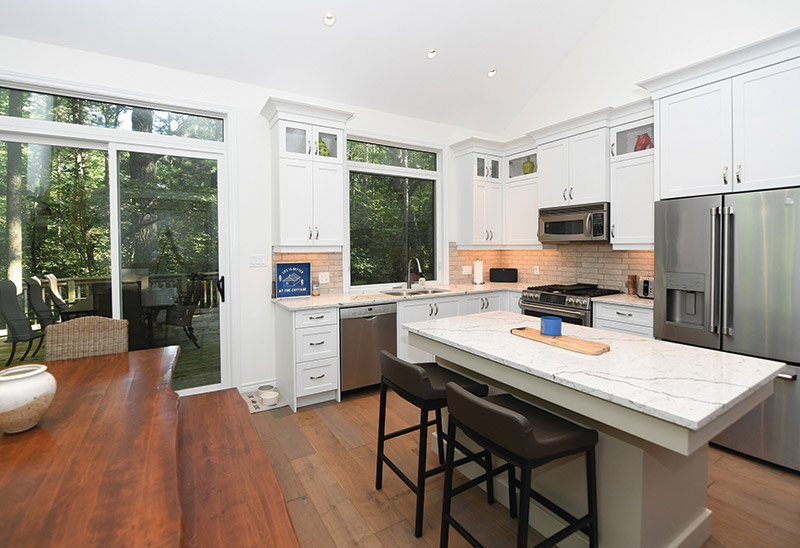 With newly configured windows, quartz countertops and new appliances, the kitchen of this Grand Bend cottage is now a bright, open modern space. 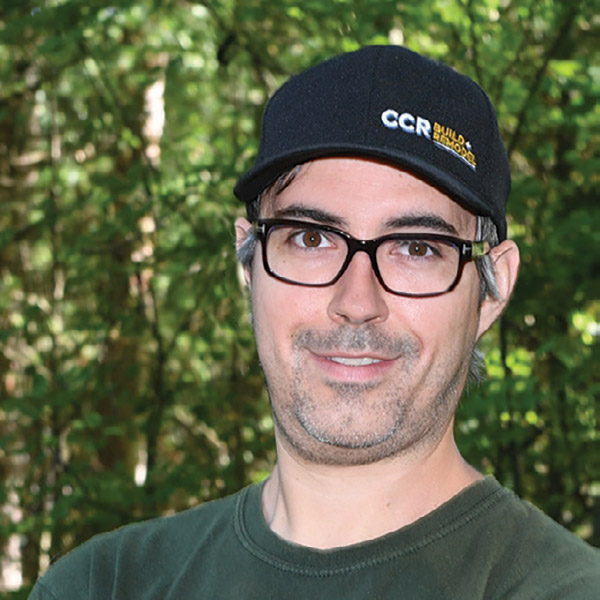 "It is right in the woods and the views are beautiful."
Peder Madsen, CCR Build & Remodel

A cozy Grand Bend cottage that is a long-time favoured retreat for a London family needed a 21st-century update. “It was a nice pine cottage, but it was tired,” says CCR Build and Remodel co-owner Peder Madsen. “So, we gave it an overall refresh.”

Madsen says the family, whose young adult offspring are starting families of their own, wanted to retain the cottage atmosphere but make it more modern and inviting for the coming generations. CCR started by removing the predominately pine wainscoting, trim and cabinets. Adding a lighter touch with white painted walls and replacing heavy pine joints with floating grey and taupe ceiling beams “ created a more spacious ambiance.

A dynamic nod to modernization involved changes to the windows, Madsen says. An original arched camber-top window, above the kitchen sink, was replaced with a transom top. This theme was carried through over the patio doors and is echoed in the upper cabinets. An arched window in the great room was replaced with a floor-to-ceiling trapezoid window, aligning with the cathedral ceiling.

Madsen says this was designed to complement the adjacent stone fireplace and highlight the surrounding natural scenery. “It is set right in the woods and the views are beautiful,” he notes.

New shelving units bracket the fireplace and engineered white oak wood flooring was installed throughout the main level. Another major change involved the stairways to the cottage’s upper and lower levels. To open up the space, a wall that extends from the upper staircase was removed. On the upper stairway, pine was replaced with ash railings and treads, highlighted by wrought iron spindles. At the top of the lower stairway, adjacent to the kitchen, a coffee bar with wine fridge was added.

Most changes were to the main level. However, new cabinetry, along with shiplap wall siding, was added to the second-floor bathrooms. The ensuite shower was enlarged and new carpeting was laid in the three upper bedrooms.

A fresh coat of paint spruced up the lower level recreation room. The few exterior changes involved replacing the blue wood shakes and faux window with brown Maibec siding on a front bump-out above the garage. Aluminum trim was stripped from around the outside of the great room window, and pine board-andbatten siding was installed to match the bump-out.

Madsen says the family is loving their rejuvenated retreat. “They’re up there all the time. It’s a great place for them to get away.” 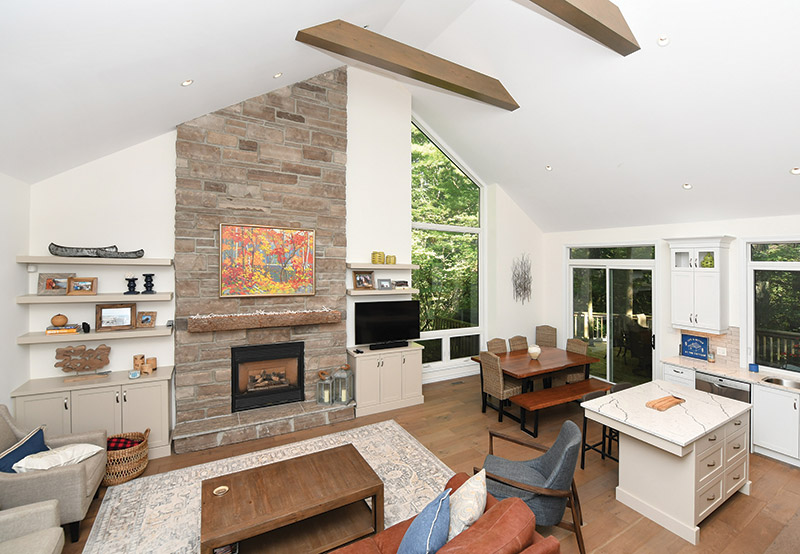 A large trapezoid-shaped window replaced its outdated predecessor, modernizing the space while allowing a great view of the cottage’s natural surroundings. 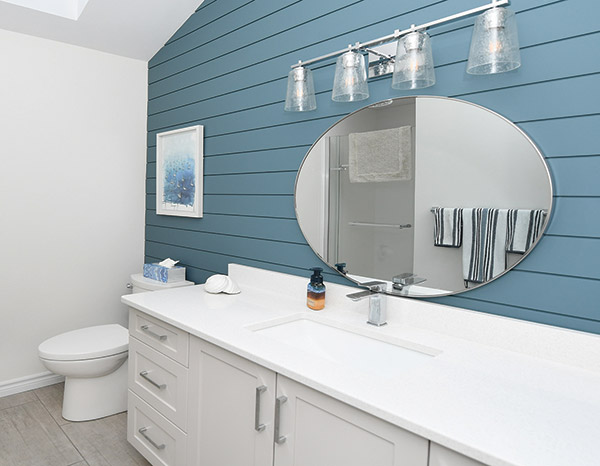 The bathrooms were updated with shiplap. 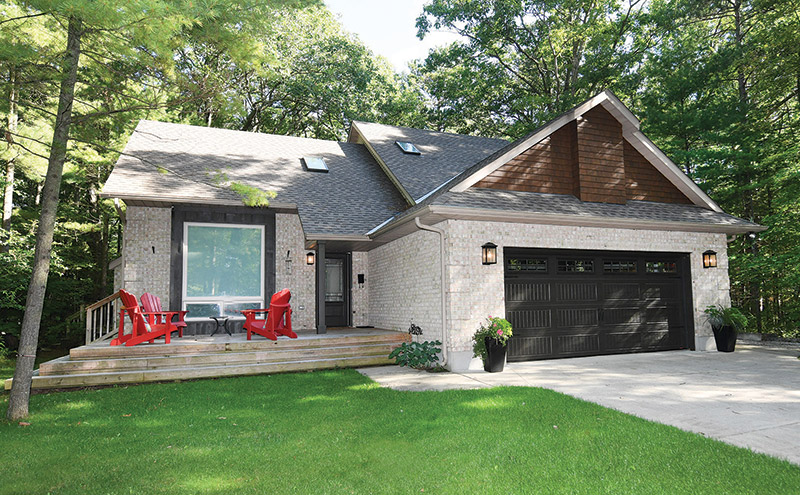 Renewing the look of the exterior included replacing the shakes with siding above the garage. 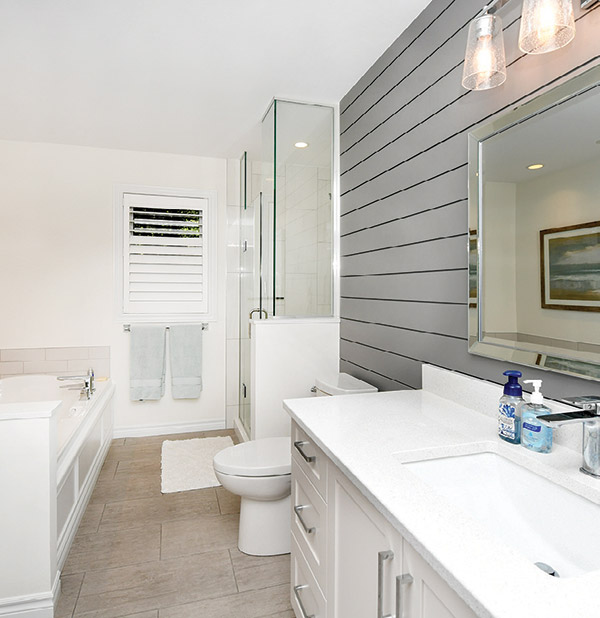 Upstairs, the ensuite shower was enlarged and new carpeting was laid in the bedrooms.