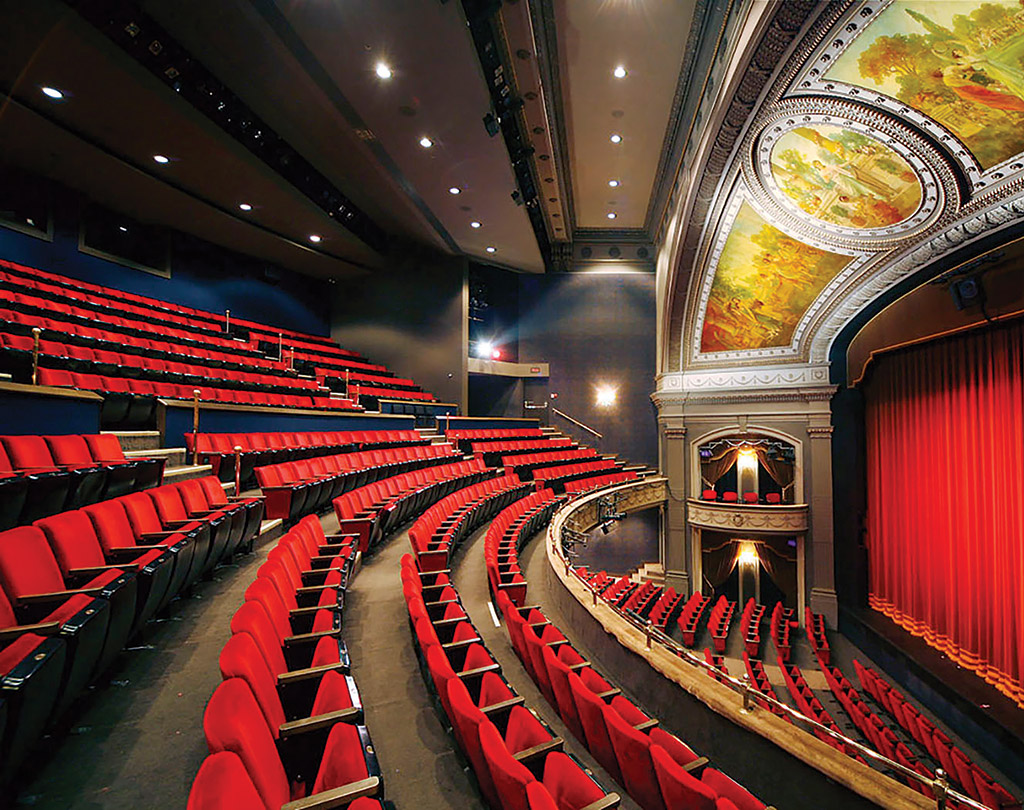 The Spriet Stage, with its historic proscenium arch, is still a distinctive part of the Grand Theatre.

Theatre Rolls Out the Red Carpet for Improved Digs

Red is symbolic of many things: love, passion, energy, warmth and good luck. The Grand Theatre’s signature colour of red is splashed throughout its extensive renovation, celebrating all those grand qualities. “The renovation is hopeful. It’s rebuilding. It’s transformational,” says Deb Harvey, executive director. “Those things are important.” When plans for the work began, nobody realized how important.

"The renovation is hopeful.
It's rebuilding.
It's transformational." 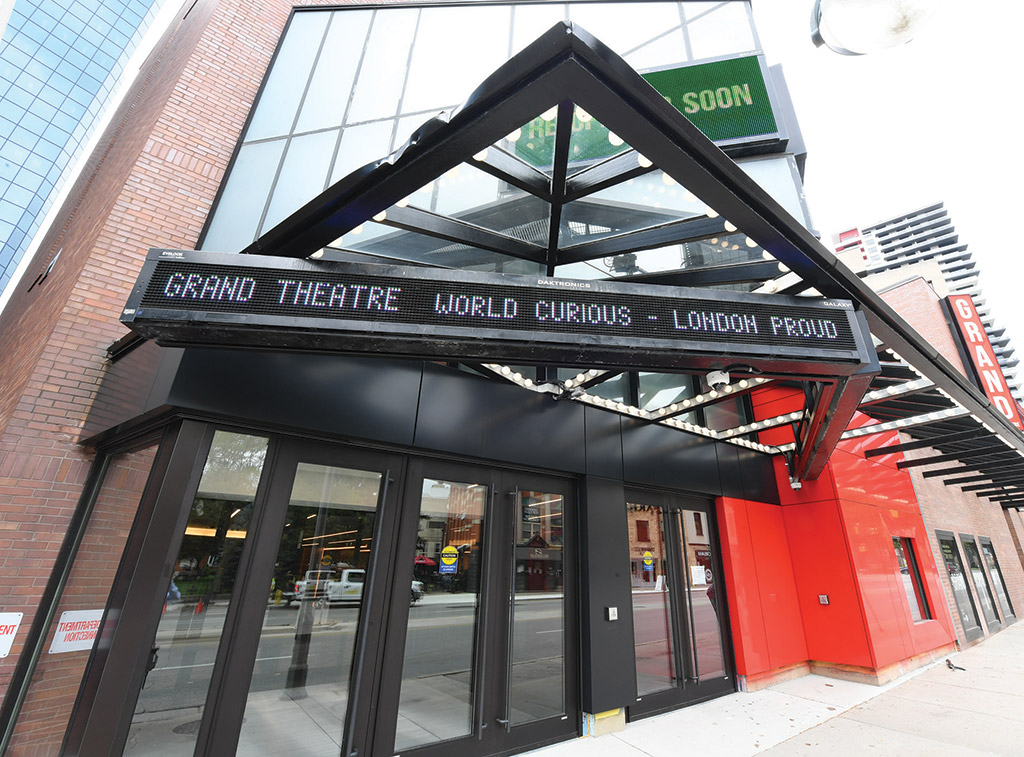 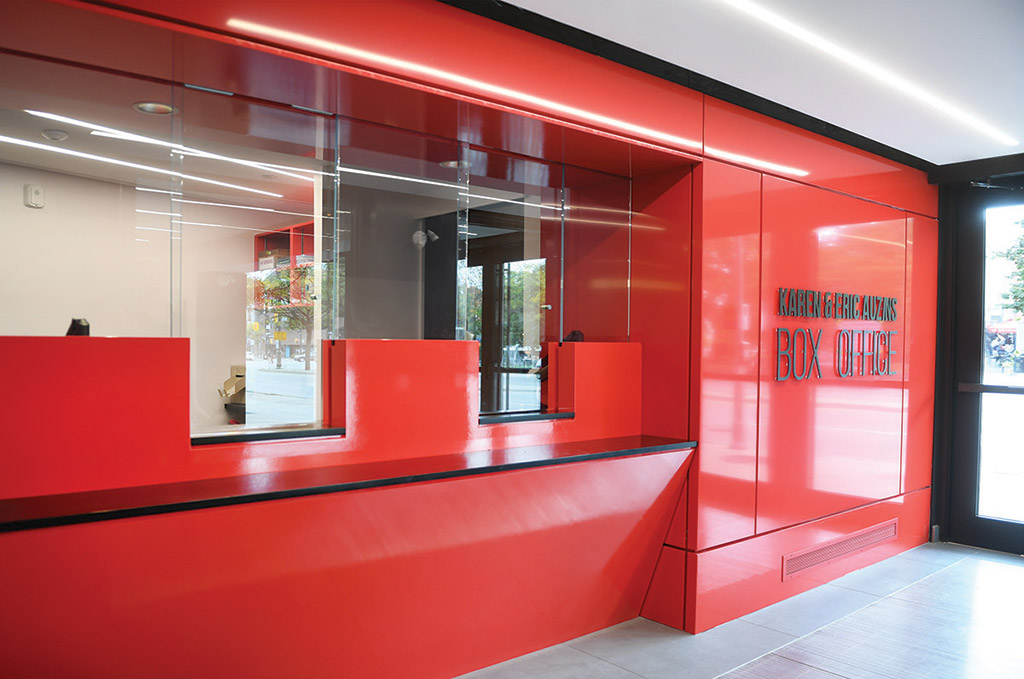 The front lobby and entrance now provide better access and better security for the box office.

A new glass and aluminum stairway provides access to the second and third floor lobbies. 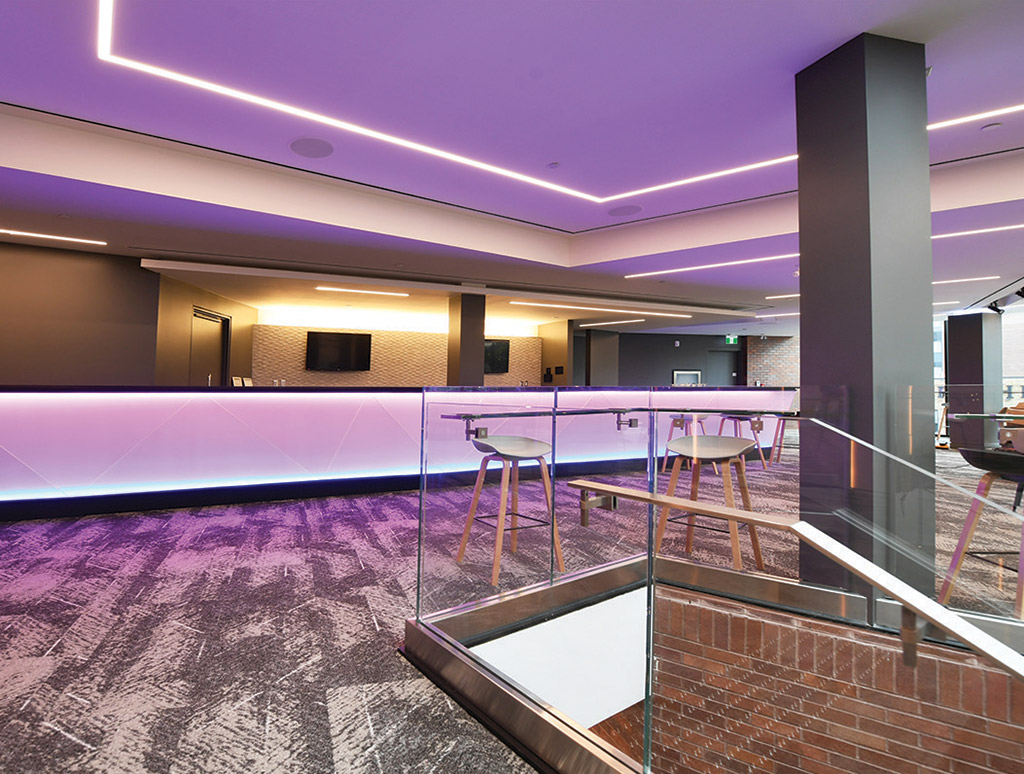 Removing the third floor’s centre wall created an open space with a small stage and room to mix and mingle. 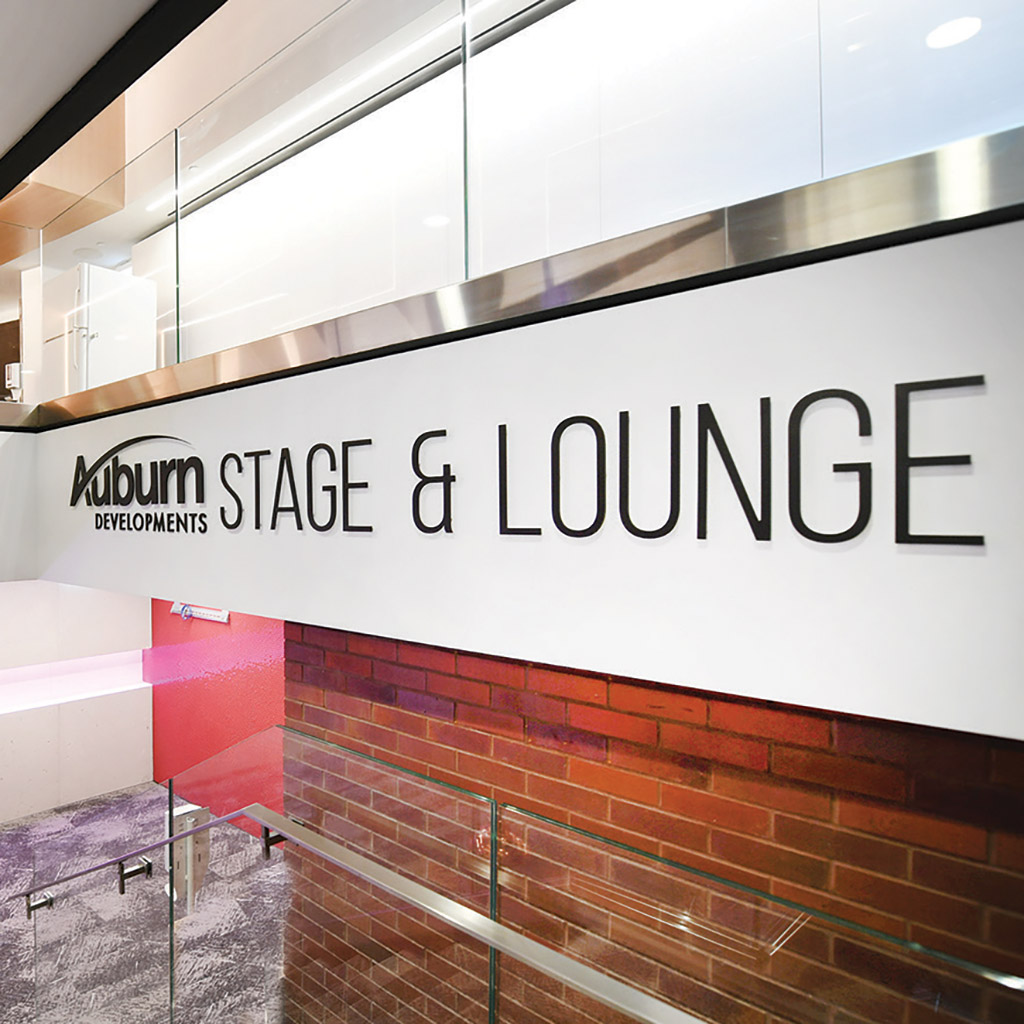 Formerly the McManus stage, it is now termed the Auburn Developments Stage and Lounge on the lower level.

The new glass and aluminum stairway draws visitors to the upper levels.

Originally, the work to update and upgrade was scheduled from May to October 2020, between seasons. But when the pandemic hit in March, “everything shut down, including construction,” says Harvey. “COVID impacted so many things. Every three months there was different legislation. Are we on or off?”

That stop-and-go reality affected timelines and costs, ballooning from three to 10 months and from $3 million to $9 million. But Harvey thinks people will be impressed when they see the results. “It was a huge project. Top to bottom everything was touched.”

The Spriet Stage (the main stage) was renovated in 2010, but the rest had been untouched since 1977-78 and was showing its age. The Grand needed a redo that was practical, purposeful and, it turns out, prescient. They had no way of knowing that many of the improvements would go from nice to necessary for 2021 and the future. These included large, open areas that allow for greater spacing, private cubicles in all-gender universal washrooms and better access to elevators.

The front lobby and entry have been reconfigured to provide better traffic flow, better access to the box office at all times and better security. A wood wall cascades from the second level to the lobby. There are spots to see and be seen, such as the small balcony on the second level.

The new glass and aluminum stairway draws visitors to the upper levels. In the BMO London Proud Lounge, on the second floor, the expanded bar spans the front window area and allows for more gathering space. The third floor’s Drewlo Lounge boasts a dramatic view of the streetscape. Removing the centre wall on this level created a completely open space with a small stage, drink ledge along the windows, expansive bar and separate catering room – a great place to meet and greet artists and friends.

The Auburn Developments Stage and Lounge (formerly McManus Theatre), also glows with red accent penny tile walls and LED lights. Inside the theatre, the walls are painted to resemble concrete. New swing doors to backstage add flexibility. The bar is relocated to open the space, adding a convenient ledge where people line up.

Patrons won’t see the new fly system for the Spriet Stage, but they will see the results. The ropes, pulleys, counterweights and ladders that operate scenery and lighting are a complex system.

“Our system was full of friction,” says Steve West, head stage carpenter. “It came from the old bearings. You had to get down on the floor and reach down to lift 40-50 pounds.” He says the new system is much safer. “It’s state-of-the-art.”

On the Grand’s website, Jared Whitty, head of flys, says, “The addition of automation gear will also enhance what we are able to do and what the audiences see.”

Project manager Paul Fujimoto-Pihl talked to staff to determine how spaces would be used. This resulted in doubling the wardrobe area and improving shops for props and wigs, the fly floor, rehearsal halls and dressing rooms. For example, the fitting room was transformed from a tight, dark, utility closet to a purposebuilt room where an actor and fitters can easily work. A glass sliding door lets light flow between rooms.

The administration floor also received improvements to add efficiency. Throughout, new flooring, ceilings, paint and tile give everything a lift.

As with any renovation, working with or around existing space can present challenges and discoveries. Challenge: flooring was poured through a second- floor window to get it quickly to where it was needed. Discovery: a Grand Opera House program from 1891 was unearthed.

Harvey and artistic director Dennis Garnhum posted a statement on the web: “Throughout the last 16 months, we’ve said that we will be back, that the theatre will return, and when we do, we will be even better than before. And today, we are following through on that commitment.

Not only have we used this time of being closed to public performances to renovate our physical spaces, but as a company we’ve embarked on a journey to grow, learn and work through a renewed Anti-Oppression lens, and we can hardly wait to welcome Londoners into the gorgeous space we have created, both inside and out.”

Garnhum created and directs Home for the Holidays: A Grand Concert Celebration December 1 to 24. “This year we celebrate the holiday season with an original concert bursting with songs, laughter and joy. I cannot wait to welcome you into our Grand home for this musical event as we celebrate this magical time of the year. Home for the Holidays will be a true family celebration with one goal in mind – to uplift your hearts.”