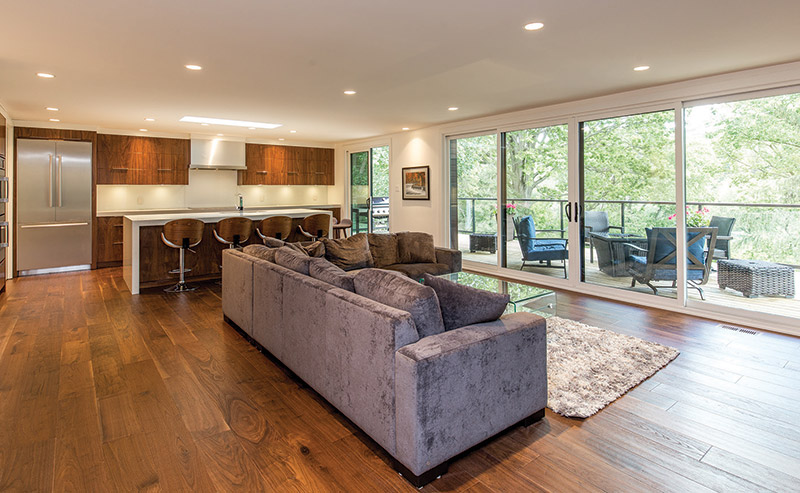 Thinking of making changes to your home? The date to mark on the calendar is October 1. That’s when the London Home Builders’ Association and its Renovators’ Council will be hosting the annual Parade of Renovations.

The day is a win/win for local contractors and consumers, says 2017 Council chairman Paul Guenette, owner of Certa Pro Painters.

“Our renovators love doing it,” he says. “It’s a great opportunity to show off projects they’re so proud of. The transformation of the properties is remarkable.”

And for consumers, he adds, it’s a chance to see the latest trends.

“People tell us that they walk away with great ideas on what they can do to their homes.”

Renovators’ Council vice-chair John Relouw, a partner at Duo Building, says he’s found most people touring the Parade are considering or planning renovations to their own homes.

“They’re making an effort to come out and see what’s going on in the industry, who’s doing what and the kind of work the various contractors do.”

Homes on the Parade will be open for viewing from 11 a.m. to 4 p.m. A $10 pass to all view all the renovated homes is available at any one of them.

“It’s a great organization and a great fit for us,” Guenette says.

The list of homes of the Parade of Renovations is subject to change. Updated information about the Parade will appear in Signature Homes Magazine distributed in the London Free Press on Thursday, September 21 and the official Parade map will appear in the London Free Press Homes Section weekend edition on Saturday, September 23.

Homes this year include the following:

• 46 Alder Grove
The main floor of this west London home was transformed by CCR Building and Remodeling. The main living area was opened up to provide an unimpeded view of the back yard, with its covered floating porch, through new oversize windows. The master bedroom also got a facelift, enlarged to include a bright walk-in closet and spa-like ensuite bathroom.

• 45 Hampton Crescent
This older west London ranch, with low ceilings and small windows, was badly in need of brightening. CCR Building and Remodeling opened up the interior, raising the roof height to allow larger windows. A rear deck, overlooking the Thames River, was also enlarged. Extensive use of skylights - including in the entranceway, kitchen, bathroom and master bedroom - enhance the natural light. The lower level, with a walkout, was upgraded with a family room, new laundry, larger windows and patio doors.

• 13 Lyndhurst Place
In this Old South London early 20th-century cottage, Covenant Construction showcases what can be done in a smaller home. The kitchen, living and dining rooms were opened as one space. Attention was given to the historical ambiance with custom pillars and a butcher block island in the kitchen. The home’s original French doors were repurposed in a bedroom reconfigured as an office. A small bathroom feels larger with the shower floor continuing throughout the space.

• 80 Barton Street
A condominium, in the Bishop’s Palace Estate complex overlooking the Thames River and Blackfriars Bridge, received a new interior layout from Duo Building. A front kitchen was moved towards the rear, enlarging and modernizing the space and blending it with the living area. A rear porch was enclosed and a fireplace added to create an all-season sunroom.

• 505 Cypress Avenue
A mid-century Oakridge side-split was given a 21st-century twist by Millennium Construction and Design. Main level walls were removed to create an open living area that includes a contemporary white kitchen. Two bedrooms on the upper level were combined to create a spacious master suite, and the main bathroom was upgraded for a brighter, more modern ambiance.

• 99 Sunray Avenue
This Lambeth home was given a complete makeover by Studiodyer, from replacing the exterior brick to enlarging the main level without altering the second-storey footprint. The master bedroom, with ensuite bathroom and walk-in closet, was moved down to the main level. The kitchen, dining and living space was opened up with 14-foot ceilings and tied together with a 17-foot island.