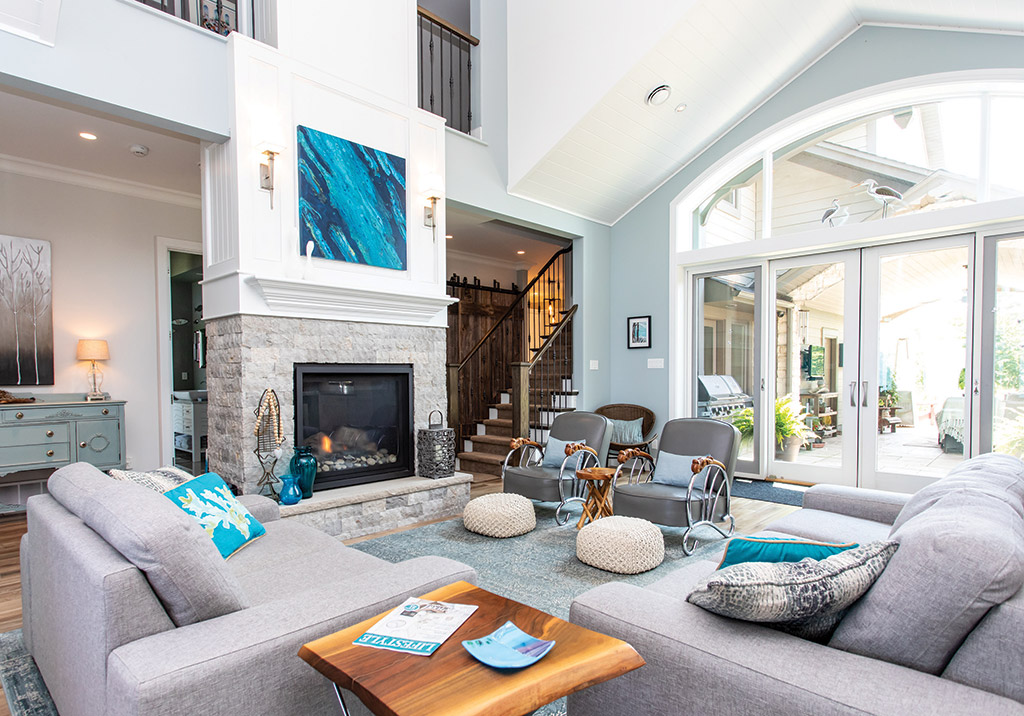 Embracing the beauty of their surroundings, the Taylors had floor-to-ceiling windows installed to enjoy views of Lake Huron from most of the rooms in the house.

Nestled amongst lush foliage and fronting an expansive beach with sweeping Lake Huron vistas, Terry and Rob Taylor have created a natural oasis. An effort that took two decades and two major builds has resulted in a home that reflects the beauty and serenity of its surroundings.

Because of its spectacular setting and lot position, the views are favourite features of the homeowners. Across the back of the house – “We call it the front because it faces the lake,” says Terry – full-height windows afford panoramic lake views from just about anywhere on the main floor. The upper-level master ensuite has a freestanding tub below a window that overlooks the waterfront.

Terry is an artist who loves capturing the lake on canvas, in all its moods. Her acrylic flow paintings adorn walls throughout the house, including the dining room and above the living room fireplace. 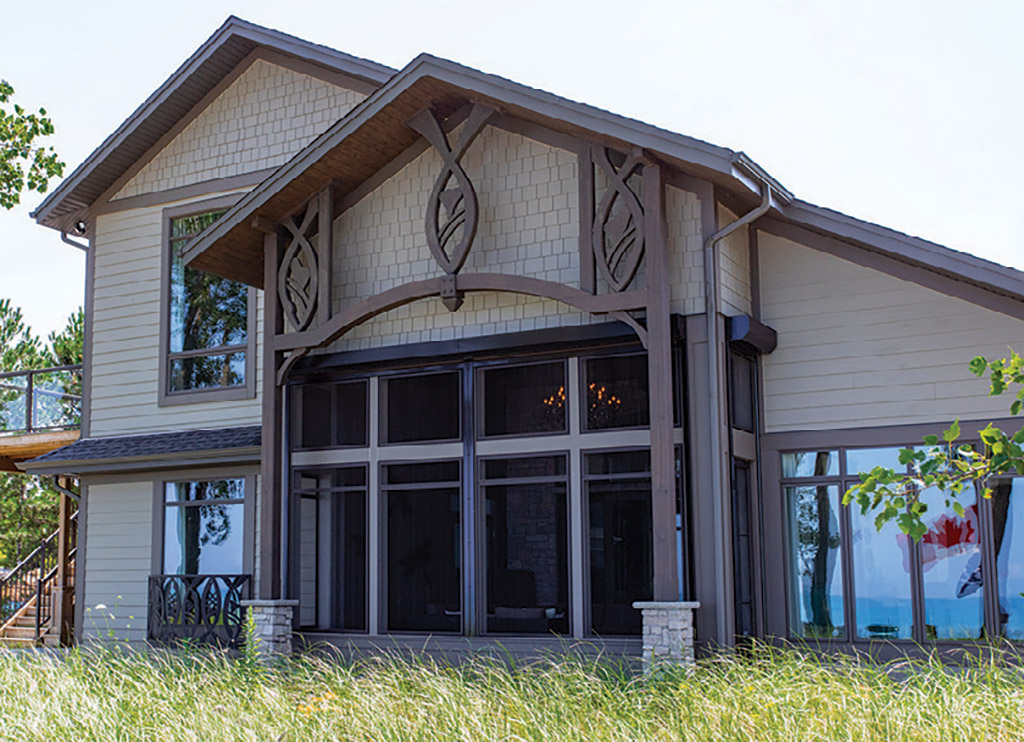 Wishing to preserve some features of their original cottage, the couple used the fish-shaped frame beams in the renovation.

The Taylor's purchased the Port Franks property in 1998. There was a small house, which was badly in need of upgrading. But when a local handyman they hired to help with the job passed away, they turned to Aylmerbased Lockington Homes. The existing structure was torn down and a new one-storey home was built using ICF (insulated concrete forms) for high-energy efficiency, a specialty of this builder.

That served them well as a holiday and weekend get-away. Twenty years later, when they retired and sold their London home, they planned to spend more time at the lake but realized they needed more space. So, they contracted Wasko Developments, from London, to undertake a major renovation. This would add a second storey and enlarge the main level to include a new dining room and sunroom. They also wanted to update the kitchen and living room.

“One of the main goals in this renovation was to maintain the feel and shape of the original house,” Terry says. “We liked its design and features, and we wanted to work with those and build on them.”

This meant retaining components such as outside frame beams shaped like fish, which were incorporated in the outside framework around the house and in railings. In the larger and enhanced kitchen another feature brought from the original house is a small island with a butcher block top. 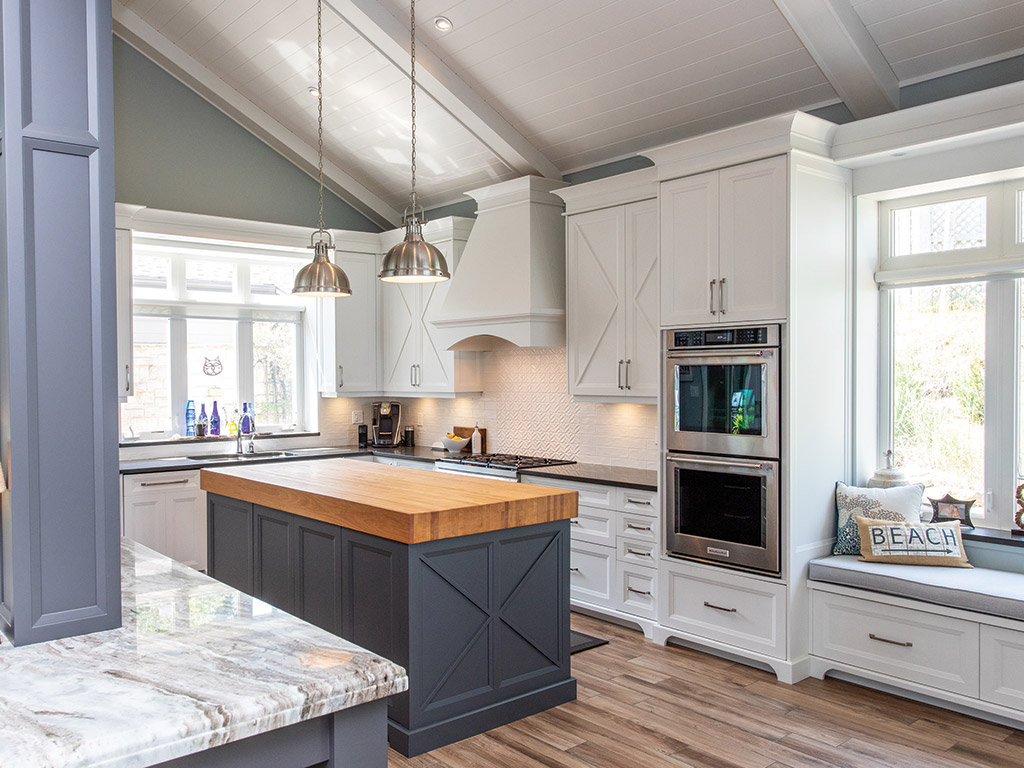 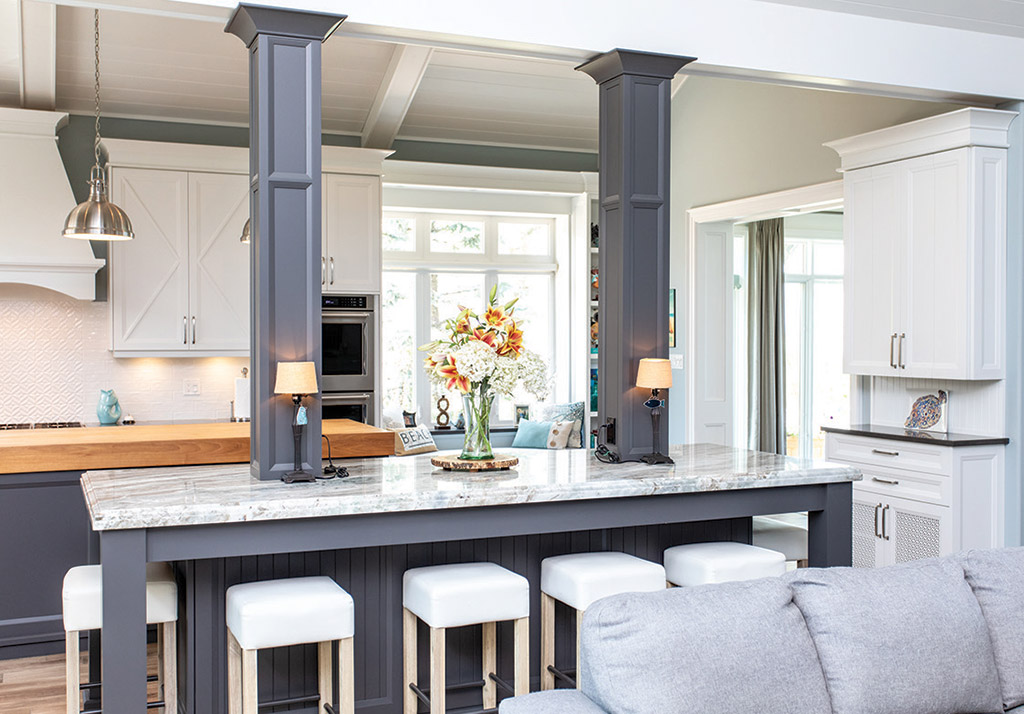 The original butcher block prep island, which Rob loves, was joined by an oversized solid surface island to provide a gathering spot when the couple entertains. 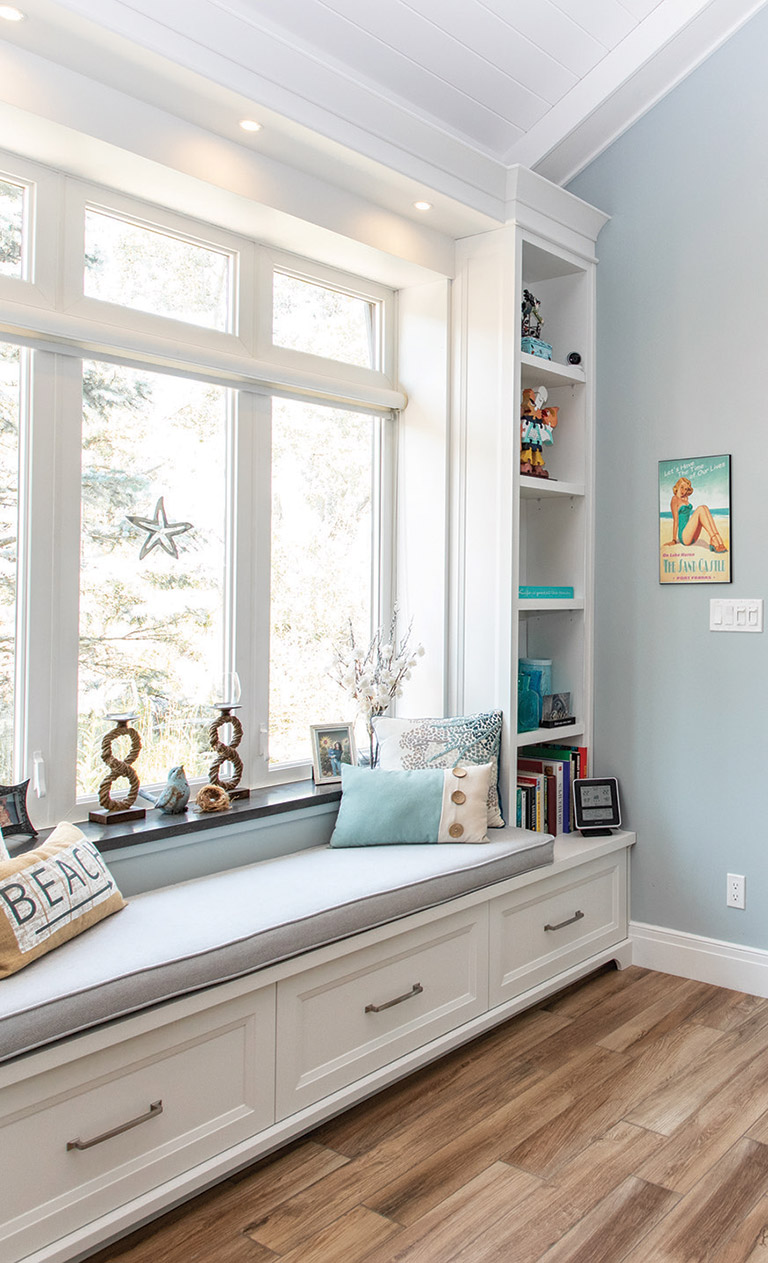 There is a cozy reading bench, with storage beneath, in the kitchen. 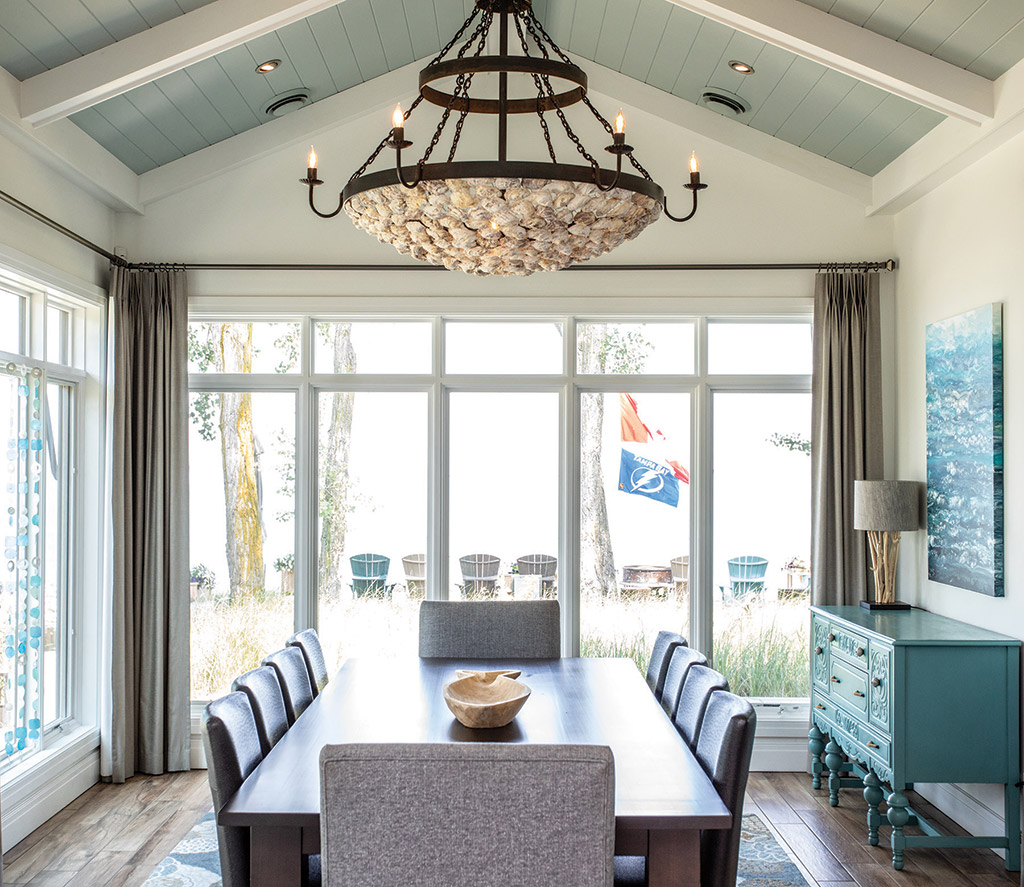 The Taylors – with assistance from the pros – designed and built this unique chandelier in the dining room. 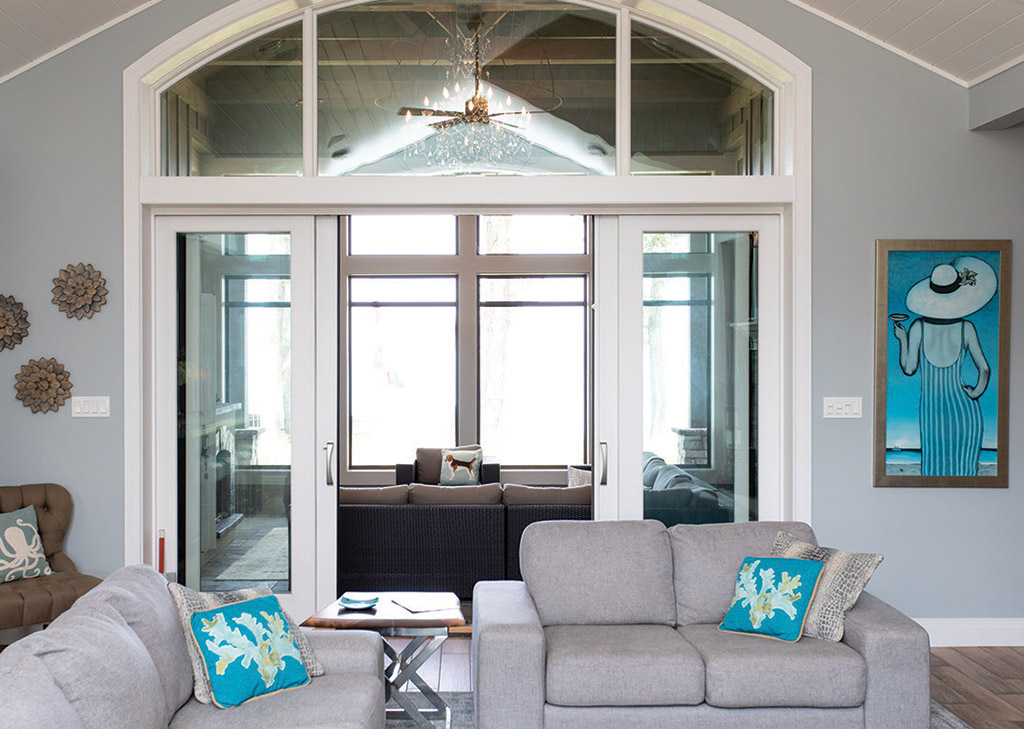 Indoors and out, lake views are available to sooth the soul. 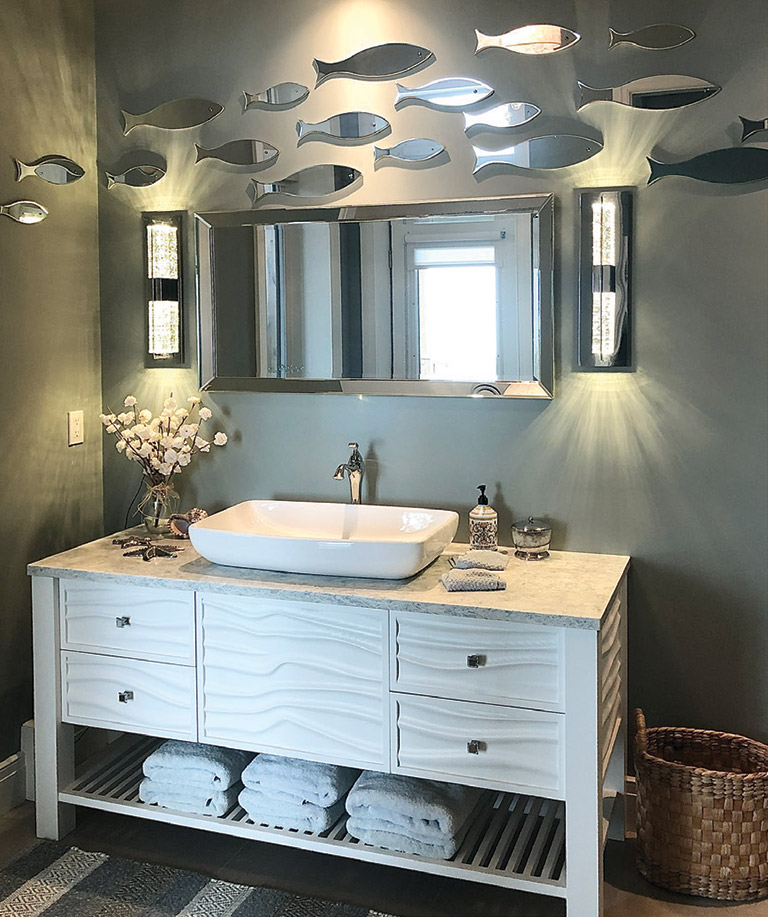 Admiration for the lake and its many components is an oft-repeated theme in the home. 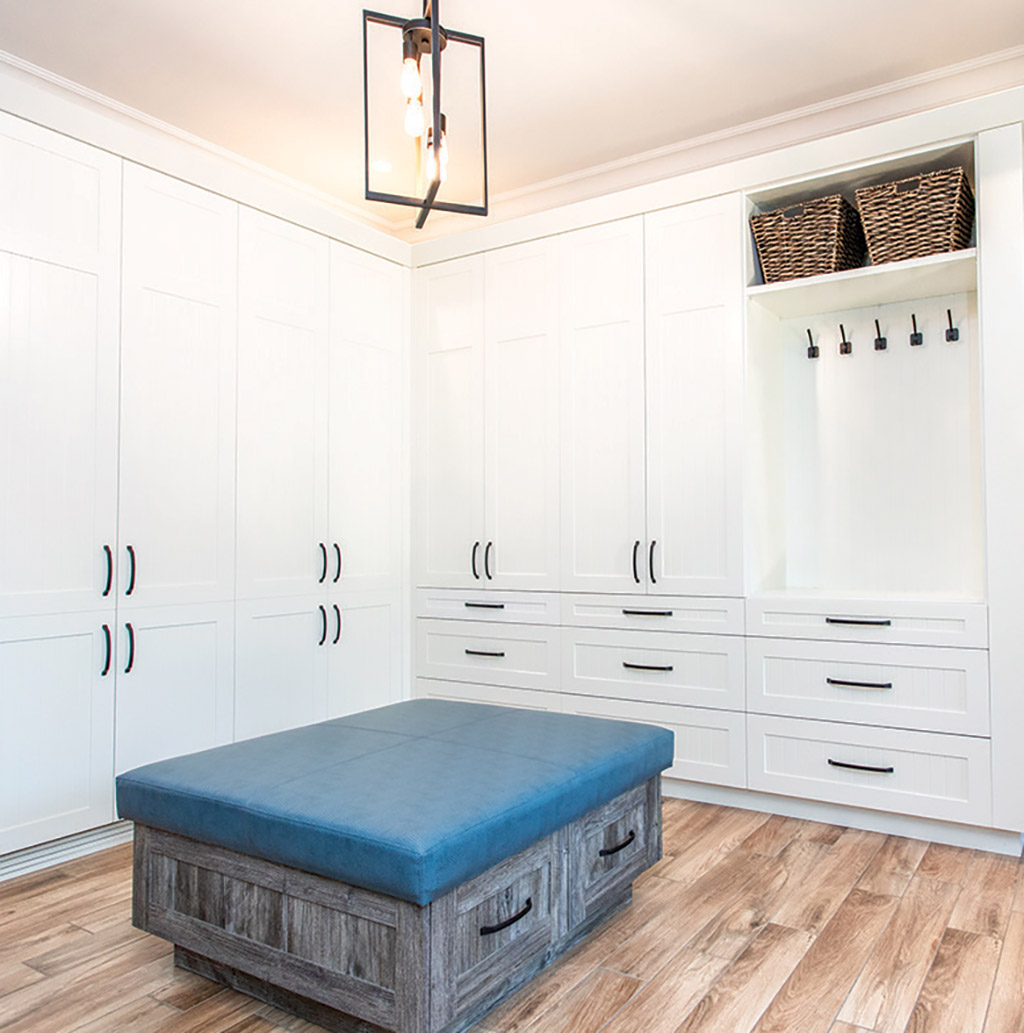 Plenty of storage is provided in attractive spaces. 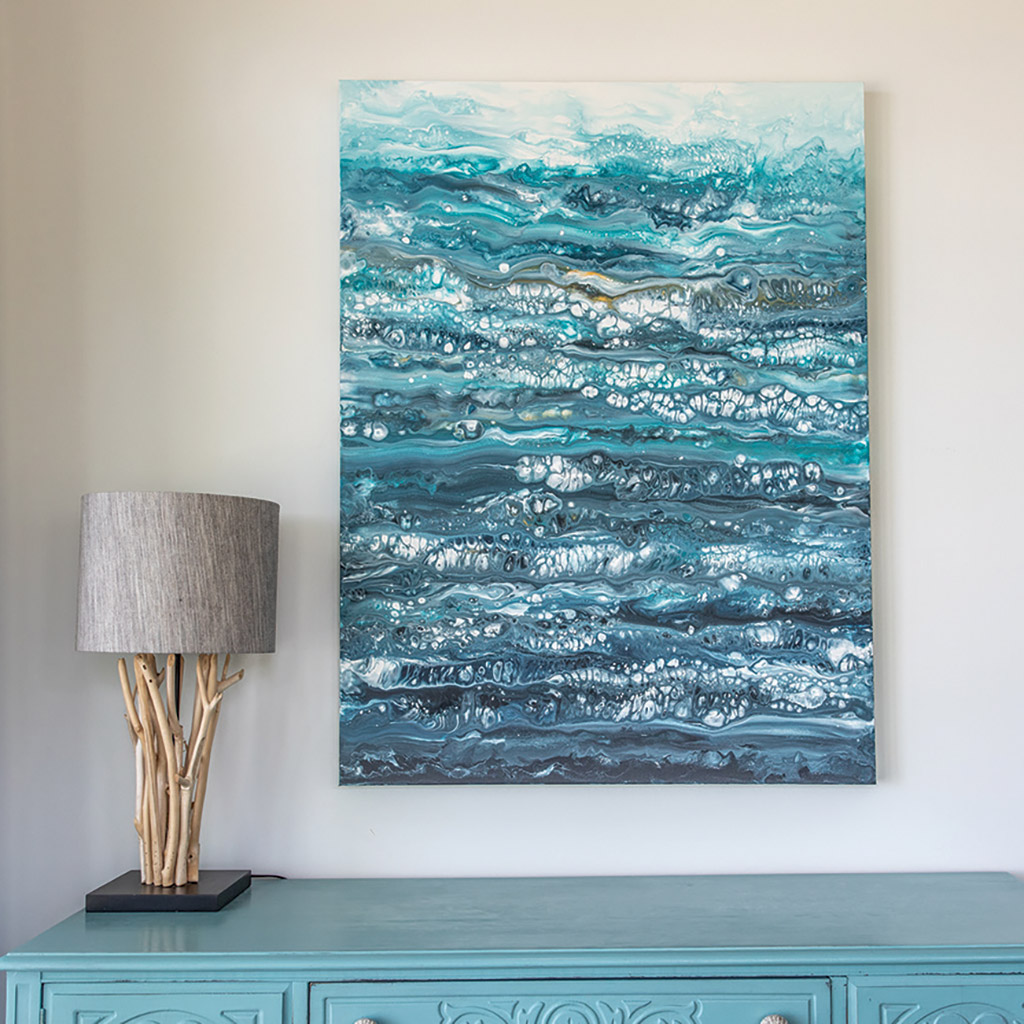 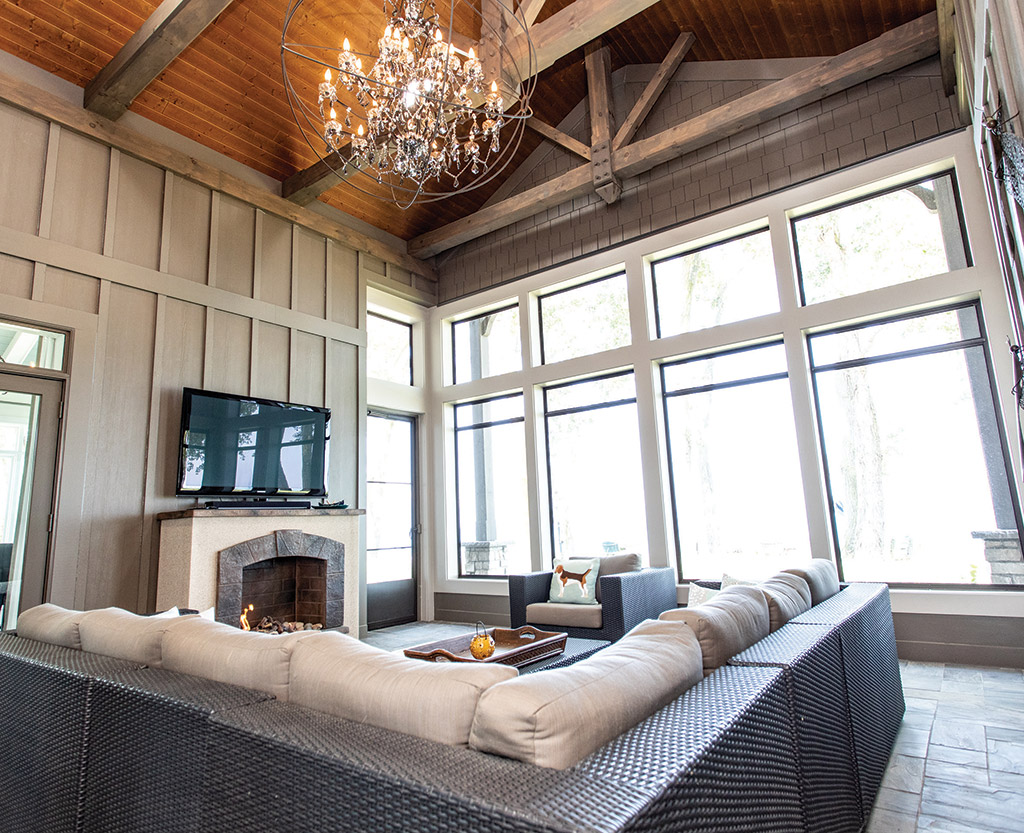 One of this home's many spacious rooms, the den, provides a quiet respite with astounding views. 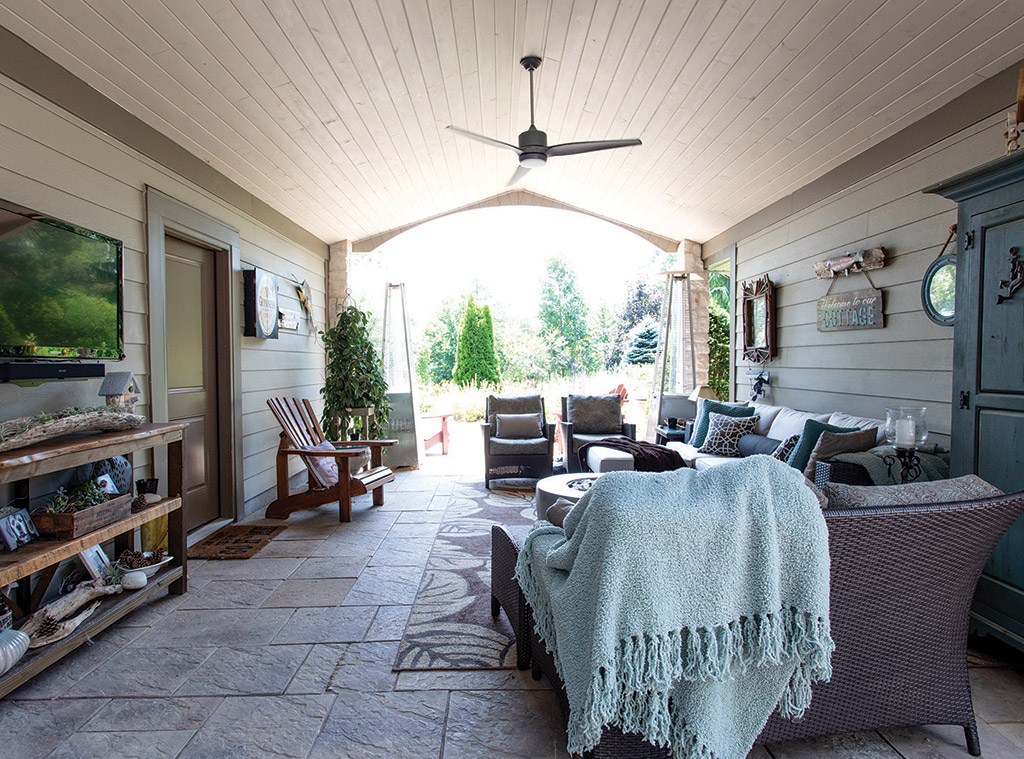 When the weather proves to be uncooperative, the covered breezeway allows the Taylors to enjoy sitting outdoors. 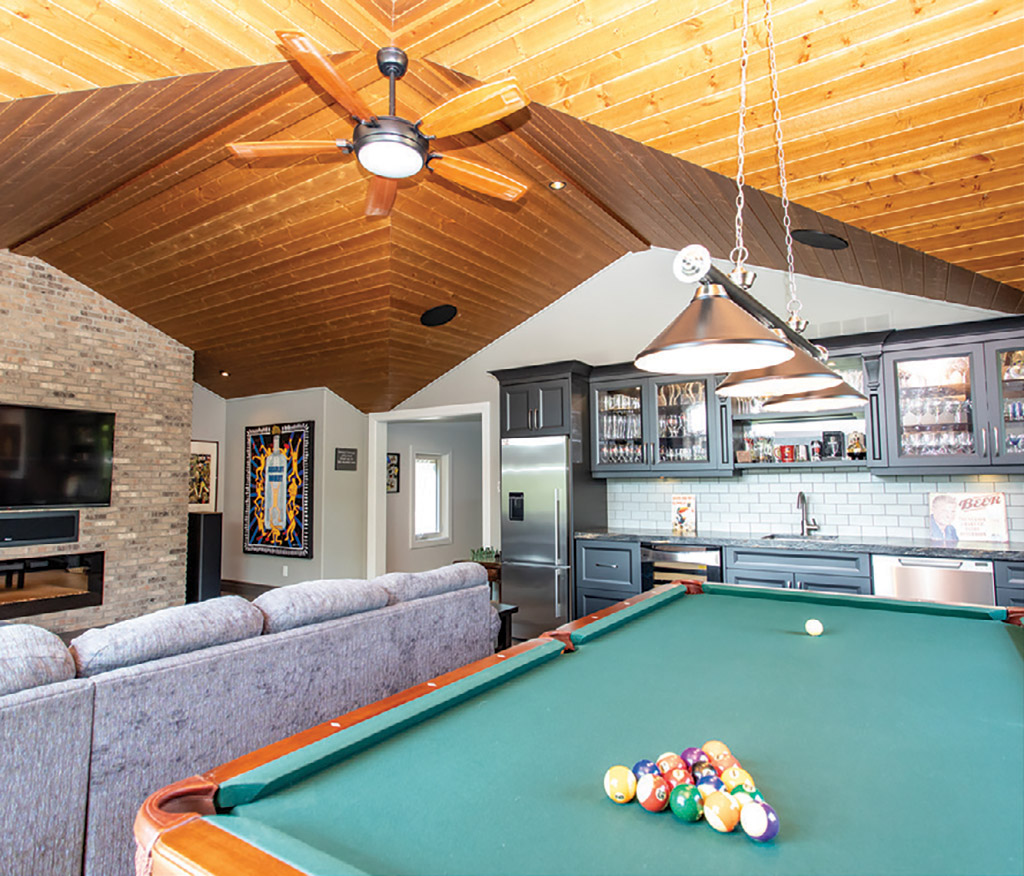 Over the garage, a games room provides indoor space to entertain.

“Rob is the cook so that’s his island.” Terry says. In the original home, it was the sole kitchen island and sometimes had 10 people crowd-ed around it to eat. The new home has added a second, much larger island that seats 11.

The original cupboards were saved and repurposed in the current laundry room/art studio, while the kitchen boasts a bank of white cabinets, com-plemented by warm dark grey trim.

The cabinets in the kitchen, bath-rooms and mudroom – as well as numerous built-ins, such as alcove shelving and drawers beneath a kitch-en window bench – were crafted by Paul Bilyea and his staff from Cardi-nal Fine Cabinetry in London. “They did a great job,” Terry enthuses

The Taylors have put their stamp on the home. Examples include a unique chandelier above the dining room table that they constructed themselves; Terry’s paintings exhibited throughout the residence; Rob’s skill as a gardener displayed in the meticu-lously manicured gardens.

The chandelier’s circular iron frame, with raised candelabra bulb holders, rests on a base of lighted shells. It is a replica of similar ones they fell in love with at a South Carolina restau-rant. When the price to purchase one turned out to be exorbitant, Terry said, “We can make one.” They collaborated with Red Iron Design, Custom Metal Work (in Mount Brydges) to fashion the frame. Terry sourced the oyster shells online from the Boston area. “Rob drilled three holes in every shell and wired them,” she says. “We’re pretty proud of that.”

The renovated home also includes a main floor den and a cozy games room over the garage, with a brick fireplace and sloping wood plank ceiling. A covered breezeway allows them to relax outdoors in inclement weather, as it is fitted out with a sofa, chairs and propane fire pit.

There’s also a guest house with a kitchenette, a bathroom and a bed-room overlooking the lake.