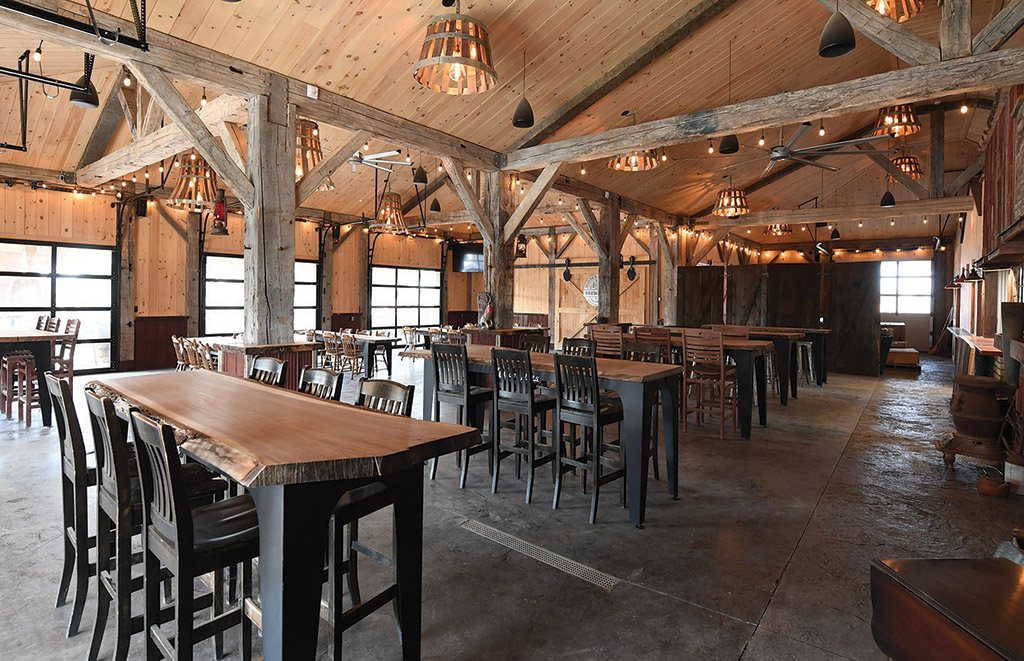 WallaceIf you’re named for a railway sta-tion, you want to be a destination – and that’s exactly what Widder Station is today. When Allen Stubbs built the golf course in 1993, with three other partners, he dreamed of buying it someday. When that day came three years ago, Allen and wife Kathy started to enhance the golf experience and expand what was offered.

“There’s a lot on the go at Widder. We doubled our membership for 2021. It’s more than just golf,” says Allen. He lists some of the ‘more than’ attrac-tions: new carts to ride on new paths, trails for walking, cross-country skiing and snowshoeing, a new 10,000-square-foot event facility and improved Tap House, glass garage doors that open for 200-plus seating, outdoor entertainment area with stage, dance floor, bar, patio, washrooms and fire pit.

With outdoor activities gaining in popularity last summer due to pandemic restrictions, Widder Station opened the patio to fast-casual format. “Last season was the first time we offered table service and it worked out very well,” he says. “That was exciting. There were lots of comments about the atmosphere, the menu, the quality of the food.”

Encouraged by the response, they decided to build Widder Flats and an outdoor event space that is COVID-friendly. Inside is a new wedding/celebra-tion venue with a brewery, full catering kitchen, and a wedding suite is planned. The stage will spotlight musical acts, with dancing encouraged on the new outdoor floor. Headliner concerts on long weekends are part of the plan. They already feature music in the Tap House.

More than 30 local craft beers, includ-ing the brewery’s own Train Wreck, wine, spirits and ciders are offered with a menu featuring local beef. “The building inside is amazing,” says Allen. “It’s barn beam construction, built by Mennonites. It’s rustic but professional.” Visitors can take a stroll down the 80-foot Western street-scape of six store fronts for the brewery, bar and coat room.

“We’re excited for people to see Widder Flats,” says Kathy, who is from Arizona. The theme was inspired by Tombstone where Allen and Kathy were married. During the winter, the Stubbs added three trails on the course: 2 km, 2.5 and 5 km. They’ve attracted enthusiasts from Lambton and Middlesex Counties looking for some fresh air fun.

Appealing to more than golfers is a strategic decision. Widder is now a part-ner with Harvest Host, a membership program for RVers. It is a location for free 24-hour RV camping with the provi-so they participate in Widder’s activities, such as the dining room, golfing or bar. Kathy says they called their program Stay and Play last summer and attracted campers from across Southwestern On-tario. As more people explore their home regions, she expects the program “will explode this year.”

Golfers are still at the heart of Widder Station. “People want something to do,” says Allen. Last summer, many duffers dusted off their clubs and hit the greens after years of sitting idle. Millennials are also taking up the sport. To meet the new demand, the course has several im-provements, including tee decks, signage at each hole, 75 carts and new paths.

The Stubbs are also creating a team to manage the multi-faceted business. Drew Wilson is the new director of golf. After coming on board in October 2020, director of marketing and events Lauren Mazzotto has grown the facility’s social presence on Instagram and FaceBook. “It’s been resonating with people. The energy they feel on social they feel when they come here. We are a one-stop shop. If you’re a golfer – great! If not, there is food, drinks, entertainment. We’re family-friendly and dog-friendly.”

“When we took over it was members only,” says Kathy. “Now we have non-members stop for a drink or a bite to eat. It keeps getting better and bet-ter.” People drive from London, Sarnia, Chatham and Goderich for the food and the craft beer. “It’s a beautiful place to be,” she says.

“We’re excited to expose Widder Station as a destination,” says Allen. “It is built with a train station theme because Widder was a hamlet outside Thedford in the 1900s.” When the CN tracks were laid, the village was moved and renamed Thed-ford. Widder may become a hamlet again: 50 residential estate lots are available. “Some members will not recognize Widder,” says Allen, “but there is so much to see and do.”