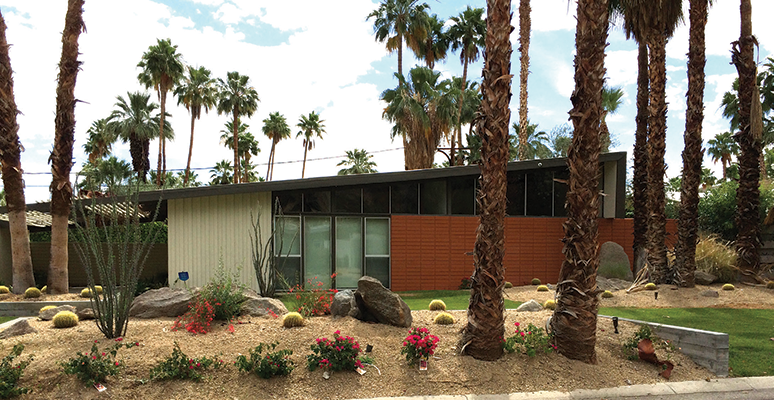 "Desert oasis - A great getaway for architectural buffs, Palm Springs is a gem"

If you’re an architecture nut (and who isn’t, if you’re reading a shelter mag), Palm Springs will make your heart go pitter-pat. The city is filled with houses and commercial buildings designed by Bill Krisel, Donald Wexler and Richard Neutra: midcentury modern architecture is everywhere. Even the Starbucks on the ‘strip’ is architectural.

According to architect Bill Krisel, “midcentury modern architecture is a language of its own,” so speak like the natives and stay in one of the several renovated MCM lodgings available in this city.

The Skylark Hotel was built in 1955 and has been restored to its MCM-period glory but with attention to how the modern traveller lives: king-sized beds, lush linens, kitchenettes (some rooms) and lots of space to spread out.

The restoration has been so thorough outside that, sitting by the pool, I expected Marilyn or Frank to stroll out of the rooms and dive into it. The hot tub is the original clover shape, making it unique in this city that specializes in special.

The Twist is a 38-suite vacationrental property that was built in the 1950s but was renovated by Howard Hawkes and Kevin Kemper of H3K Design, taking this rundown property from gloomy to glamourous. Emitting a cool, modern vibe, each one of the studio, one- and two-bedroom units has a kitchenette. With a new pool deck, hot tub and glass railings, the outdoor space is inviting, too.

Both properties offer spectacular views of the San Jacinto Mountains to wake up to each morning.

One way to get an eyeful and an earful of all things mid-century is to take The Modern Tour guided by Michael Stern. He authored Julius Shulman: Palm Springs, one of the most pictorially captivating works about this architectural jewel in the desert. Stern’s tours get you into places you wouldn’t otherwise be able to enter, like the Elvis and Priscilla house. 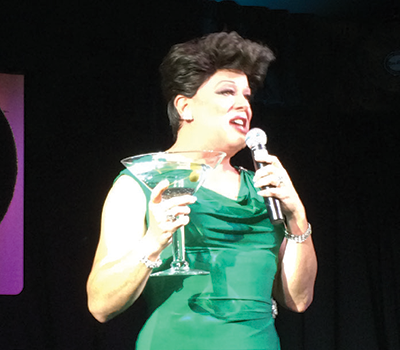 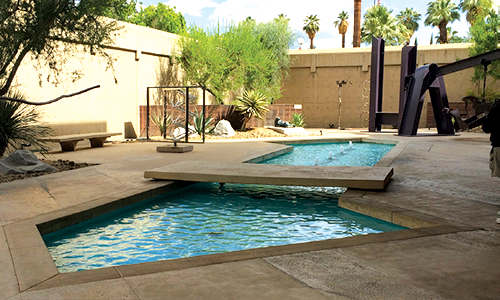 The couple rented this amazing house for a year and used it for their honeymoon in 1967.

Though both hotels have facilities to cook for yourself, eating out in Palm Springs is also an adventure. Many of the restaurants have outdoor patios and decks to enjoy the night air during cooler months and offer lovely views of the San Jacinto Mountains.

At J.J.’s Oasis or Las Casuelas Terraza, you can have a taste of Mexico. At the latter, bands entertain while you dine or dance.

Downtown, Lulu’s has a touch of Hollywood glamour with its large white banquets and long list of cocktails. The ceviche, served in a martini glass, is tart and tasty.

If you want to kick it old school, head to Melvyn’s Restaurant, where tuxedoed waiters serve in the cool confines of the airy solarium. The elegant brunch includes endless champagne and a wide selection of menu offerings, including traditional favourites like steak and eggs and eggs benedict.

Trio is everyone’s favourite in the popular Uptown Design District, offering a varied menu and indoor and outdoor seating.

For both great food and entertainment, check out the Purple Room – a 1960s supper club popular with the Rat Pack. The lush purple velvet curtain pulls back to reveal Judy Garland in The Judy Show. Female impersonator Michael Holmes belts out songs and keeps the audience laughing while dining on classic American fare expertly prepared. In keeping with the cool ’60s vibe of the place, the cocktail menu offers wellcrafted classics like mai tais and manhattans, but with inspirational tweaks to the recipes.

The colourful Buzz trolley can be found zipping around town, picking up and dropping folks off for free each week Thursday to Sunday.

One must-see stop on the Buzz is VillageFest. On Thursday evenings starting at 6 p.m., locals offer their wares along Palm Canyon Drive. Artists and artisans come down the mountain and from around the area. Street musicians entertain and food booths offer a wide array of tasty treats. Make sure you stop by the Sonny Bono statue for a picture with the former mayor of Palm Springs.

To spend some quality time indoors, a visit to the Palm Springs Art Museum or Architecture Design Centre are musts. The Art Museum’s glass gallery is a dazzling display of colour and form. You can catch a glimpse of a Degas or Picasso while strolling the galleries and garden.

The Palm Spring Aerial Tramway – the second-longest in the world – is not to be missed. The 15-minute ride up and down the Chino Canyon is breathtaking, while lunch at the Peaks Restaurant is a pleasure for both eyes and taste buds.

If you’re visiting in spring, fall or winter, bring a jacket, as a hike along the mountain trails can be chilly during some months.

Whether you’re an outdoor adventurer or an architecture buff, or you’re seeking the renewal offered by the beauty of the desert, Palm Springs should be on your life list.