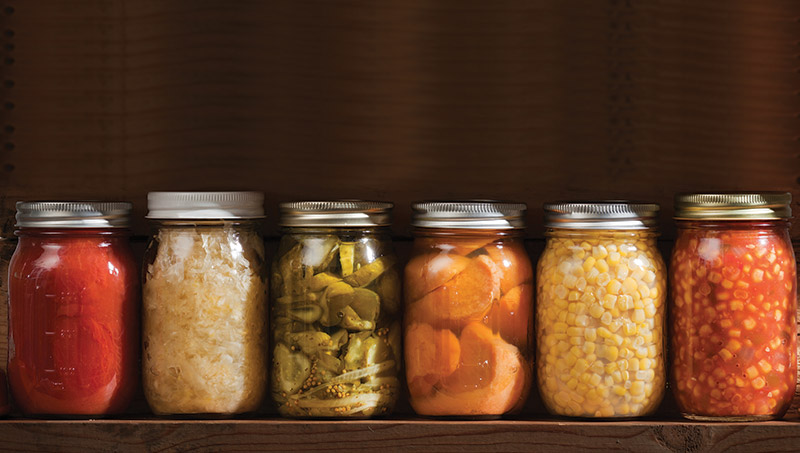 With an increasing focus on trends like the 100-mile diet, foodnot- lawns and edible gardens, growing one’s own food is in vogue. Gardeners and wannabes like the potential lower cost of veggies and fruits, but the true attraction is knowing – really knowing – where their food comes from. Knowing that it is truly organic; knowing that they can be somewhat self-sufficient; knowing that they are living within a smaller carbon footprint.

Directly consuming and using those fresh ingredients in dishes during the growing season is a real ride on the flavour train; however, an overabundance of produce often results in attempts to lob bumper crops of zucchinis to neighbours, friends and co-workers.

Preserving and fermenting are traditional skills that have become somewhat lost in recent decades as much of the population became urban dwellers. But more people growing their own food mandates learning to preserve it to enjoy in non-growing months.

Since many restaurants also focus on using local ingredients in their dishes, canning has become a trend for them as well. Plant Matter Kitchen, a vegan restaurant, gets the lion’s share of its vegetables from a local farmer.

As the restaurant moves into its second year of operation, Chef Elyse Keegan and sous chef Hillary Watson are developing recipes that highlight preserved ingredients. Pickled beets and apples, canned sunchokes and cauliflower and house-made kimchi are among the preserved vegetables that were being served during the colder months at this completely plant-based eatery.

“In addition to canning vegetables, we’re preserving fruit to make jams and tomatoes to make our own ketchup. Because the area we live in is so seasonal, it’s important to preserve flavours and nutritional values,” says Watson.

Eating fermented foods, such as sauerkraut and kimchi, is becoming more popular. Raised awareness of possible benefits to digestive health has pushed these traditional favourites into the limelight. Plant Matter Kitchen offers a popular dish, termed the belly bowl that features kimchi, pickled vegetables, beans, dried kale, blueberries drizzled with a house-made dressing made with kombucha, a fermented tea mixture.

The allure of eating local, fresh, organic greens and herbs in the cold winter months can’t be denied and doesn’t have to be because Slegers Living Organic Greens produces them year round in their large greenhouse, located near Strathroy. These veggies aren’t cut but rather are packaged in soil, so they are still alive until time to use them. According to Pauline Slegers consuming living greens is a much healthier option. “Our greens are full of living energy, so you’re getting the benefits of active enzymes as well as energy from the plant, along with the vitamins and minerals.” Slegers plants and harvests greens, herbs and microgreens weekly to supply the many restaurants that are using this option to offer patrons fresh ingredients year round. Home cooks can take advantage as well by picking up Slegers Greens at many local distributors.

Southwestern Ontario residents are able to enjoy a plethora of produce and summer’s bounty is ready to enjoy and preserve for months to come.