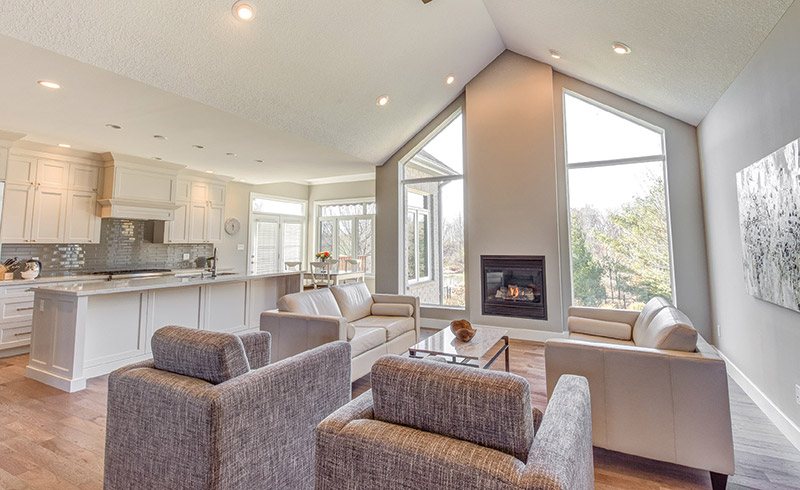 "Now inside and outside of this home match"

The setting was perfect. The home had a large backyard, with a garden, and backed onto an environmentallysensitive area, with a pond and walking trails, protected from future development.

Inside the house was another story. Angled walls, casement windows, arched doorways and transoms created a distinctly colonial ambiance.

“We wanted an updated look, something more classic and timeless,” says homeowner Shirley.

They turned to CCR Building and Remodeling to help create that and Shirley says they couldn’t be more pleased with the result.

The space was opened by squaring off the angled walls and arches, creating cleaner lines and by removing a wall between the kitchen and living area, according to Arne Madsen, CCR co-owner, who spearheaded the project.

A large island now separates those areas. Casement windows bracketing the rear fireplace were replaced with full-length clear glass that follows the lines of the vaulted ceiling. Complemented by expansive rear windows in the kitchen, the family now has unimpeded views of surrounding nature.

A master suite, running along one side of the home, was also given a major overhaul. The front bedroom and rear ensuite bathroom were switched so the bedroom now has floor-to-ceiling windows overlooking the backyard and natural area.

Moving the bathroom to the front allowed it to be expanded and the large glassed-in shower, free-standing tub, double basin vanity and heated floors have created a spa-like atmosphere, Shirley says.

The bedroom and bath are joined by a hallway lined with walk-in closets on one side and built-in cabinetry with drawers along the other. 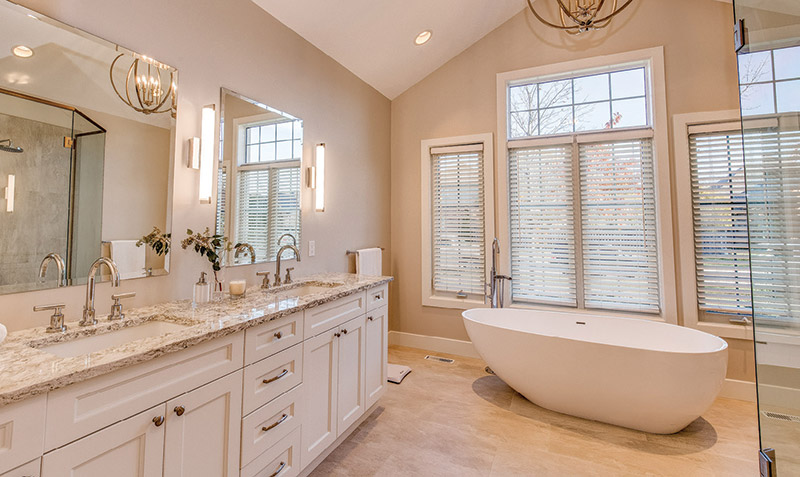 Other modifications enhanced the simplified aura, including changing some vibrant wall colours to a more serene grey complemented with white trim.

Between the foyer and front dining area and the kitchen/living room, a stairway to the lower level was also updated with a new wooden railing and the stairway itself was refinished to match new hickory flooring.

The front garage formerly accessed a laundry area, bathroom and pantry. This area was reworked to include a separate laundry room, plus a convenient mudroom and an enlarged three-piece bathroom with tub. The makeover of this area also allowed the pantry to be accessed directly from the kitchen.

Additional space was also created for a home office.

Shirley gives credit for many of the décor touches to designer Myra Tuer, of Detailing and Design by Myra, whose input “complemented the great work by CCR.

“I really believe that collaborating with people who are passionate about what they do helped us to arrive at a beautiful end product that is functional, unique, and captures our gorgeous view.”