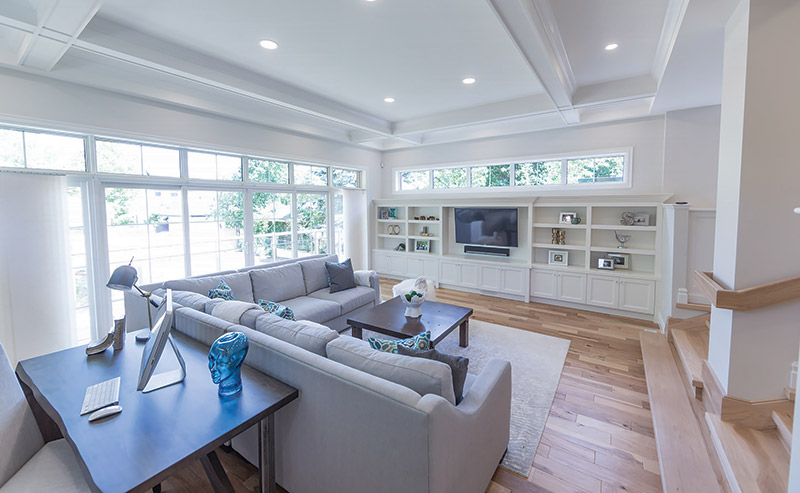 With neighbourhoods named Old North and Old South, it’s not surprising to learn the city of London is full of century-old homes. Many of these residences were built in the late 1800s and early 1900s when builders could not anticipate how families would live in the 21st century. Ensuring those old homes still function for today’s families is the primary goal when it comes time to renovate.

Jessica and her husband are busy professionals and the parents of two young children. Before moving into their heritage property on Wellington Street in Old North almost two years ago, they knew the house needed updating. “We wanted to maintain the character of the house but, at the same time, to also open it up and brighten it,” says Jessica. “We wanted something not super traditional, but also not super modern.” Not entirely sure of her tastes, Jessica enlisted the help of Kay Habib, the owner of Skill Décor.

To understand what her clients like, Habib conducts what she calls a “discovery session,” during which she asks questions ranging from what colours they prefer, to what TV shows they watch, and what hobbies they pursue. “This helps me learn their personalities,” says Habib. “From Jessica and her husband, I learned that with such busy lives, they preferred a living environment that was not complicated, a space with clean lines and little visual noise.”

With the help of Habib, an architect, a renovation expert, and an architectural technologist, the homeowners agreed that if they were going to do the renovation properly now was the time. The gut job was underway. “It wasn’t part of the original plan to take the house down to the studs,” says Brian Schon of Alair Homes, the renovator overseeing the project. “But there were floors that needed to be levelled, knob-andtube wiring that needed removing and wooden support beams which needed replacing.”

With open-concept living currently the choice of many families, “We had to configure the space to accommodate this way of living, carving out a space where life happens and tying together the kitchen, eating area and family room through natural light,” explains Brad Skinner of Skinner & Skinner Architects.

“We introduced more light through French doors and windows above the doorframe in the newly added family room. These windows, which encase the room, capture the sun as it moves throughout the day.”

With the family now firmly ensconced in their home, Jessica says the eight-month renovation was worth it. “I don’t feel like I’m living in a magazine, but it looks as nice as a magazine.”