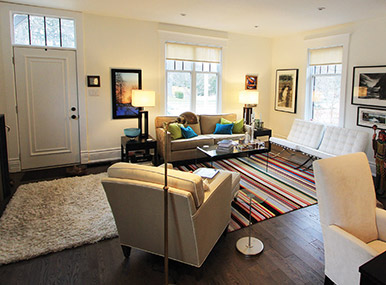 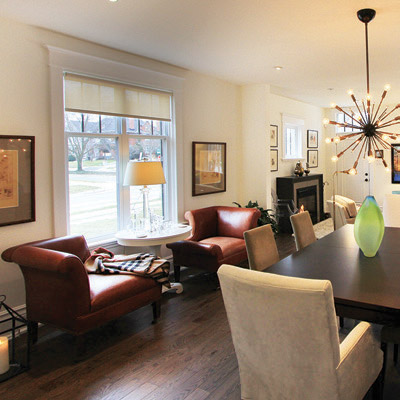 Downsizing from an expansive home to one half the size can be daunting. That’s the challenge that faced Peter Groom and Stephen McClatchie when they purchased a home in Old North London a couple of years ago. They loved the location and the two-storey home’s vintage early-20th-century character. But they wanted to add some 21st-century design elements and create a space that, though smaller, still felt like “living large,” Groom says.

Millennium Construction and Design took on the challenge with results that have the owners feeling they’ve achieved their dream home. The goal was to “create symmetry and a feeling of space flowing throughout the home,” says Millennium’s Mark Vaandering. Various design techniques were used to achieve this, such as repurposing spaces and painting the walls white throughout. Many large windows, affording a wealth of natural light, also added to the airy ambiance, Vaandering says. “There were so many details in that house to work with, and I just love how it all came together.”

The open-concept main level incorporates a cozy front living room with gas fireplace and an adjacent dining area leading to the new ultra-modern kitchen. The kitchen received a complete facelift. Its size was substantially increased by removing a pantry and a large bathroom. A two-tier island was added with a lower eating space and upper working counter. Existing cupboards were replaced with custom cabinetry that extends from floor to ceiling and is painted in a dark finish to blend seamlessly with the black stainless steel appliances. The cabinets are complemented by the lighter granite countertops and the glossy porcelain tile backsplash.

The main floor living area was extended by an addition, adjacent to the kitchen. It includes a beverage centre and laundry area with garden doors to a small outdoor balcony. The addition also incorporates a four-piece bathroom with heated floor, a stand-alone bathtub, spacious glassed-in shower and granite-topped vanity, echoing the counters in the kitchen, and beverage centre. These combine to create a contemporary and luxurious space, Vaandering says. Flooring on the main level was replaced with solid oak hardwood.

On the upper level, one of three bedrooms was converted to a spacious dressing room, with cabinetry lining each side and bracketing an end window. This is the only place in the house where colour was used on the walls, a punch of denim blue offsetting the white cabinets.

The creation of the dressing room allowed for additional space in the remaining two bedrooms. The front-facing master bedroom now includes a mini-library with a computer desk and bookshelves along one wall.

A small upstairs bathroom was also refurbished, replacing the bathtub with a glass shower to create space. Flooring in both upper and lower bathrooms is matte finished porcelain tile.

While the home is becoming everything its owners hoped for, the renovation is still ongoing. Future plans will see the addition of an expansive recreation and entertainment room behind the kitchen at the rear of the house with a wrap-around covered porch. 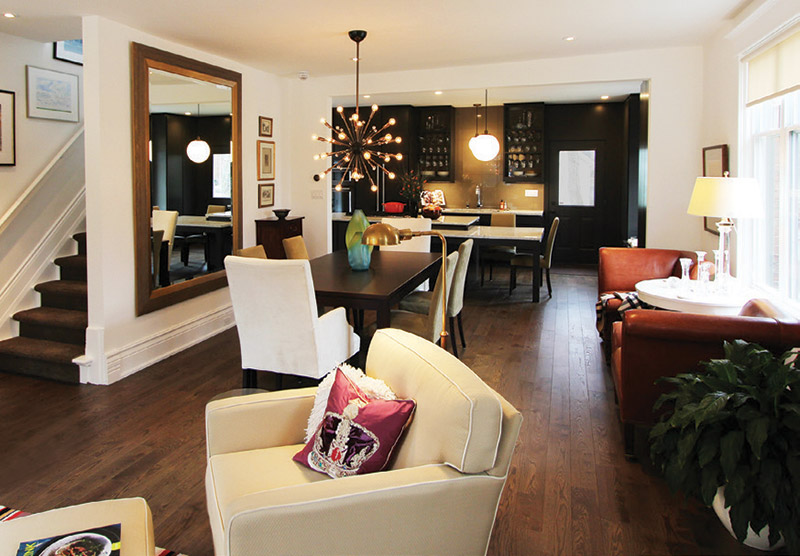 The open-concept main floor incorporates the living room, dining room and kitchen. The latter was overhauled and expanded thanks to reformatting space formerly occupied by a pantry and bathroom. 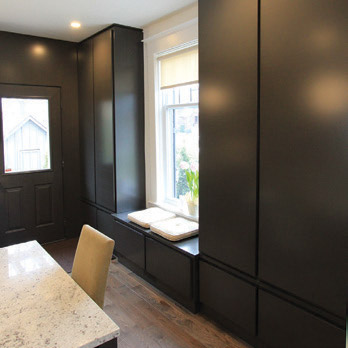 The kitchen’s window seat creates a cozy nook for reading and relaxing. 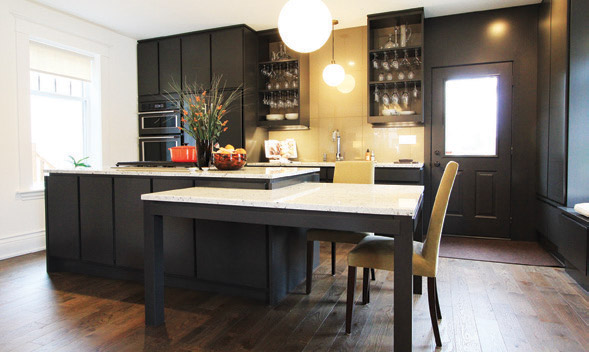 The kitchen is now a modern space for friends and family to gather to create meals. The two-tier island has working and seating areas, and the cabinetry is painted a dark finish to complement the other main floor finishes. 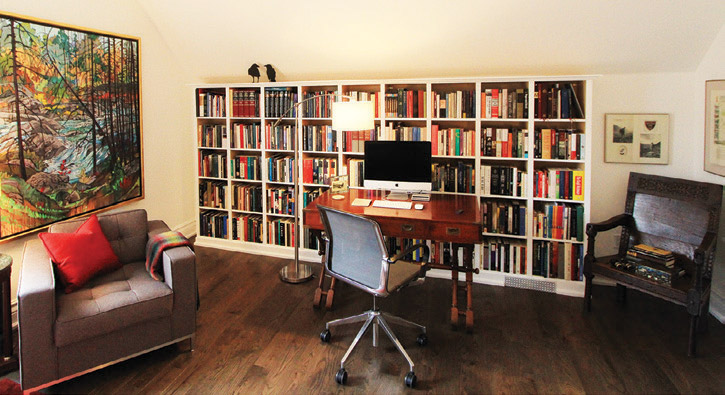 The master bedroom includes a library area, with shelving for books and a computer work station. 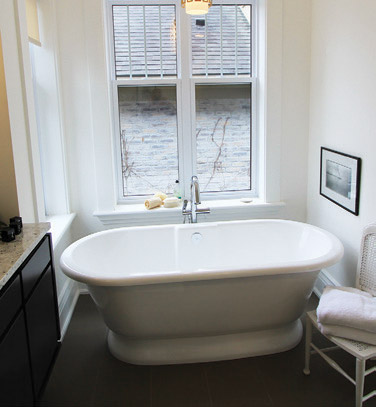 The renovated bathrooms in the house sport modern fixtures, flooring and lighting. One has both a stand-alone tub and a glassed-in shower. 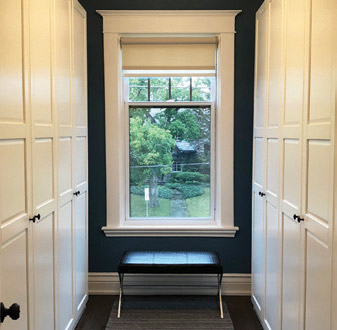 Denim coloured walls highlight the white cabinetry that lines both walls in the dressing area. 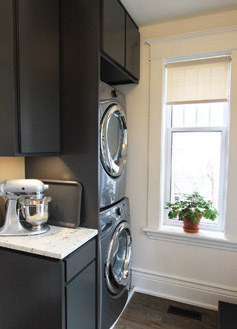 The extra room allowed by the main level renovation resulted in the addition of an attractive, useful space that’s designated as a beverage centre and a laundry area.