From Gut to Glam 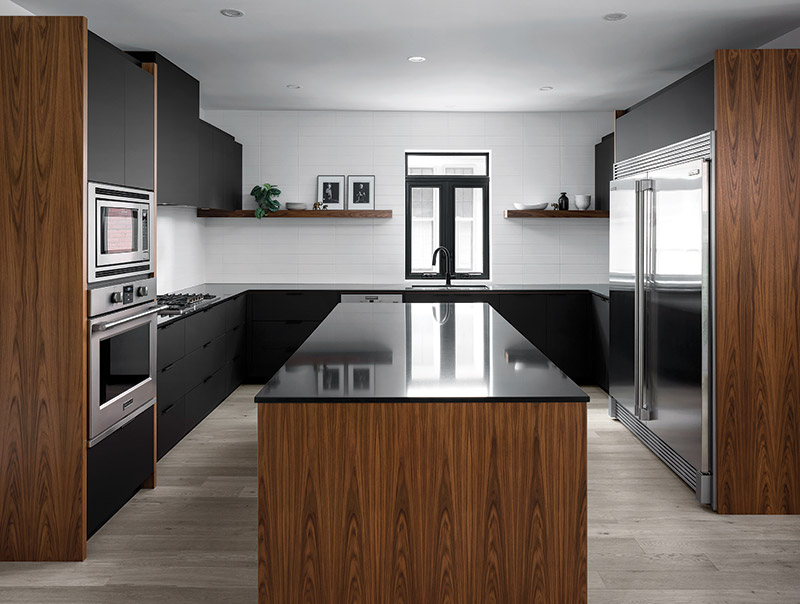 Black cupboards, black countertops, black backsplash. This was the vision Andrea Nuttall had when she and her husband Mike started renovating the kitchen in their almost century-old home. "Everyone says black was really horrible," says Andrea. "But we wanted modern. We wanted black. And we told our designer to go for it."

The result is a kitchen you would expect to see in a magazine. Spanning the entire width of their home in Old North, the kitchen is now triple its original footprint. But it is not all black. Convinced it might be too dark, the Nuttalls compromised and opted for the simplicity of a white subway tile backsplash. It complements black dovetailed soft-close drawers made of solid maple, black cupboards and black quartz countertops, all wrapped in teak.

A three-metre long floating island centres the space, featuring storage on one side and seating on the other. "That island really feels more like a piece of furniture," says Elias Polizoes, co-owner of The Wood Studio. It was the first time The Wood Studio had ever contemplated designing a floating island of that size. To ensure it would remain standing and not sag in the middle, "we did a trial run with a workbench at the shop and it worked," says Polizoes. "We gave them a piece of functional art."

A student rental for years before the Nuttalls took ownership, the house had been neglected and was the victim of many renovations. It needed to be gutted, taken down to the studs to achieve the intended result. "It was a very chopped up space, a very segregated space," says Luke Oslizlo, co-owner of Details, Renovation & Design. "We opened it up to ensure every inch was utilized."

The couple had their list of musthaves. For Andrea, it was what she calls the "world's largest fridge." For Mike, who has a five-cups-perday coffee habit, it was a designated coffee bar. Storage was high on both of their lists. "We knew exactly what we wanted, in general," says Mike.

"The house was dysfunctional," added Andrea. "I just wanted to do the kitchen. But if we're going to do the kitchen, we have to change the layout to get into the family room. And while we're at it we kind of have to do the dining room because it's connected to the kitchen."

Before they knew it, they were moving out and the demo crew was moving in.

There were some pleasant surprises along the way, including the discovery of 12-inch fir boards beneath the plaster. Paying homage to the history of the house, those boards were removed and sent to Miller and Co. Wood Studio, which created a stunning dining room table.

The Nuttalls and their seven-yearold son have now been living in their renovated, modern space for about half a year. And there are absolutely no regrets about choosing black cupboards and countertops. "They're very easy to maintain," says Andrea. "With a little soapy water, they come clean and, believe me, I'm no domestic goddess!"